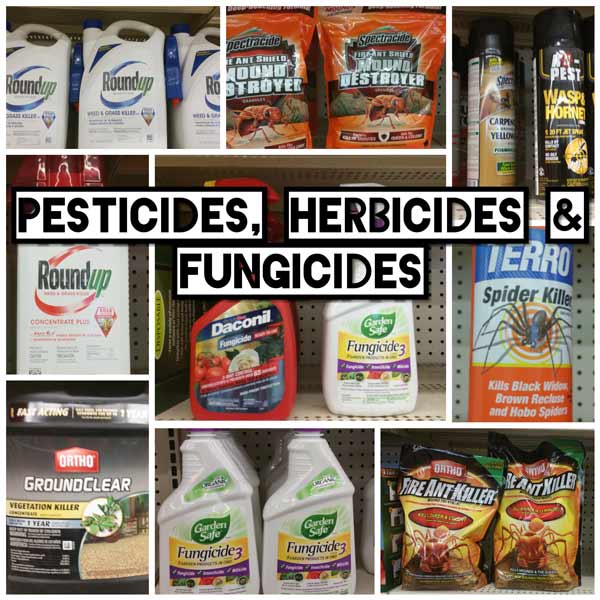 Previous articles have mentioned chemicals that are used to control pests, weeds and mold. There are three basic categories of chemicals applied for these purposes: pesticides, herbicides and fungicides. Knowing the difference helps put the toxicity of these classes of chemicals in perspective. Sometimes they’re the best choice for managing a problem, the lesser of two evils. Other times their use might be due to budgets or simply chosen for sake of ease. In the latter cases there’s a tendency for over-use, application of amounts that build up to become seriously toxic to people and wildlife over time. Understanding what you’re trying to control and how to control it responsibly is the key to using these toxic chemicals in the right amounts.

The three classes of chemicals used by people maintaining lawns, parks and agriculture in Florida are: pesticides, herbicides and fungicides. Florida is an easy place for things to grow. It’s a great environment for growing all sorts of things that won’t grow as well other places: citrus, orchids, tropical fruits and nuts etc. It also has a wide range of native species that have to compete with non-native species. It’s hard to maintain even a place dedicated to Nature like Gumbo Limbo, keeping non-native species from growing there, without some elbow grease, hands-on weeding. Once you put your hands to the soil and struggle to make things grow you can’t deny the practical importance of having an array of chemicals to keep your garden you hoped to keep organic from failing completely.

Pesticides are used to control things as large as rats down to things as small as aphids. They target animals, the biology of animal systems, with lethal effect. This puts them at the top of the other two classes in terms of toxicity. If it can kill a rat easy then it can kill you easy too. Certain pesticides target insect biochemistry and are less lethal to mammals like us than they are to bugs. This doesn’t mean insecticides, a sub-class of pesticides, are good for you – it just means they’re more lethal to bugs than they are to you. Homeowners can purchase pesticides at garden stores and apply them judiciously themselves but there’s scary precautions on the labels that make many people prefer not to handle them.

Lots of people in Boca Raton prefer to hire lawn care companies that apply pesticide to lawns and plants outside homes. Whether a homeowner is applying a tiny bit as needed or paying a service to apply a lot, frequently, they’re still going to soak up, breathe in, and be exposed to a certain quantity that’s applied. So will pets. It’s best to be informed about what kind of pesticides are being used around you.

Herbicides are used to control plants. Plants would over-run us quick in Florida if we didn’t stay on top of them. This means removing lots of plant material from wherever you’re maintaining the ground frequently OR spraying a lot of herbicides around to help prevent the growth in the first place. Removing the plant material creates a lot of waste and requires a lot of effort. Herbicides, on the other hand, can be sprayed easily from a golf cart wherever plant growth isn’t wanted.

Since plants come in two basic types: dicots and monocots, often one or the other is used depending on what you’re trying to kill. Glyphosate, or RoundUp, is called a non-selective herbicide because it works on both branched veined leafy plants, dicots, and straight veined plants, monocots. While it has been reported to have lower mammalian toxicity other more selective herbicides, like 2,4 D, a dicot killer, are more toxic to us. Agent Orange, an herbicide that was initially touted to be safe, kills monocots like palms selectively.

Fungicides are used to kill molds and fungus. Florida is the home to many molds that thrive in warm, wet climates. Molds are a problem with plants because they attack the roots. This isn’t just a problem in tropical climates.

The reason there was a giant migration from Ireland to the USA was because of mold attacking the potato crops, making it difficult to live there. While some crops aren’t susceptible to rots others are so susceptible that Florida is an impractical place to grow them, for example potatoes.

Bananas are also susceptible to fungi; the difference between an organic banana and one that isn’t labeled organic depends on whether fungicide is applied. Bananas grown at lower altitudes require fungicide for optimal yields. Bananas grown at higher altitudes grow fine without the fungicide because the fungus doesn’t do well where it’s colder and dryer. Fungicides can be toxic to people.

Why does being careful with them matter?

We had a poll in BocaWatch in our recent article about herbicides. The poll asked if people would eat a fish from a fresh water canal in Boca Raton. A clear majority of people said no.

It’s common knowledge that pesticides, herbicides and fungicides that are applied to lawns and plants end up draining away with stormwater, ending up in canals and in the Intracoastal. On days when it rains  the fresh rain water mixes with the toxins and becomes the water that fills the canals. Calling water in canals “fresh water” is somewhat sadly ironic. Everyone knows our canals are a poisonous environment, but the number of people still paying lawn services to apply these chemicals in excess speaks to the fact that most people don’t care.

Unfortunately the native species that call our fresh water systems their homes don’t have a choice in the matter,; they  have no choice but try to survive in spite of it. Native birds like herons and wood storks can’t shop in the organic section. Otters have no other fish to eat than the ones saturated in these chemicals.

Are there alternative means to controlling pests, weeds and rot?  Sure: Borax, a salt that’s relatively non-toxic is excellent at controlling indoor pests. Pulling weeds out by hand is the oldest non-toxic means to control them. They don’t run away unlike pests. There are even gardening tools that make weed removal easier, like rakes, hoes and machetes.

Instead of using fungicide a serious agriculturalist will use the liquid that drains out from worm farms – “worm tea” – to control fungus. It’s loaded with bacteria, the natural enemy of fungus. This battle that’s been going on between bacteria and fungus for millions of years was what led to penicillin being discovered. We can continue to make their eternal war tilt to our advantage easily by just raising the same worms you can go fishing with.

Alternate methods may not be easier but there’s a wealth of info online from people who’ve succeeded (and struggled) with them. Please take the time to research how to solve your problems with pests, weeds and mold without poisoning yourself or your environment.