Home Topics Our Most Precious Asset at Risk

It is of major importance for the Zoning Board of Appeals (“ZBA”) to deny the application for a variance to the setbacks for 2500 N Ocean Blvd.

The applicant , Natural Land, LLC, knew full well when they purchased this land in 2011 that it was a non-conforming undersized parcel. Why would they do this? Because they were confident that their law firm, Gray Robinson, could manipulate the ZBA and the City Council to their advantage. They came close at the first meeting of the ZBA. Of the 6 members of the board present; one member recused himself for what he felt was a conflict. The other 5 voted three to two in favor. However, it requires 4 affirmative votes to pass. The application was denied.

Leading up to this meeting, the only notification required is to any property owners within five hundred feet of the proposed project; The Ocean Club. The meeting was scheduled in August. Nobody was in residence. The appeal of the ZBA denial was for just a month out at 10am on the first day of the Jewish Holiday. The hope was for another low attendance.

Council for the applicant argues that this type of variance is common place and should be no big matter. He uses comparisons from properties that are significantly west of A1A and closer to the intercoastal water way. It is likely that all were part of a planned development in the early 80’s. They are not on the east side of A1A.

In the mid 80’s, the City worked tirelessly with developers to preserve our beach. Most parcels of land along A1A had land on both the east and west side of A1A. The Ocean Club was originally planning to build on the east side right on the beach. In this instance the City Council worked with the developer and transferred the density from the east side to the west side allowing for a higher building on the west side. Similar deals were made with the Yacht and Racquet Club and San Remos. Couple these deals with a few city purchases and a large donation and you have what is there now: real natural land!

From the house at 2330 N Ocean Blvd, which was built 70 years ago under Palm Beach County jurisdiction, all the way to the city line, there are no buildings on the east side. It is probably the most significant natural asset in Boca Raton.

At the first ZBA meeting in August, it was pointed out Natural Land, LLC owned parcels on both the east and west side of A1A. It was mentioned that maybe a similar deal as with the Ocean Club could be discussed.

Two days before the appeal to the City Council of the ZBA’s denial, Natural Land, LLC transferred the west parcel via a special warranty deed to another entity for $10. That entity was formed on September 11, 2015!

For the City Council meeting on the 22nd, the Ocean Club Association, retained Attorney W Tucker Gibbs. He put on an impressive presentation concerning law associated with Variances and what is required to grant one. It was enough to cause the City council to pass it back to ZBA. However, having watched the tenor of the board members, I believe had the council voted then, it would have passed.

If you want to preserve our most precious asset, keep our local officials from being manipulated, twisted or maybe worse, stand up and let them hear your voice.

Oh, by the way, what Natural Land, LLC wants to build is a 10,000 square foot 4 story, 46 foot high single family structure. Just what our sea turtles want to see when they first hatch! Further, there are two other parcels on the east side waiting to see what our city government does with 2500. If granted, 2330 already has plans to drop that house and put up a monster.

The third is across and south from the Yacht and Racquet Club, and I have been told it is under contract.

Only your voice and involvement can untwist our local city government, preserve the intent of previous City Councils and save our beaches. 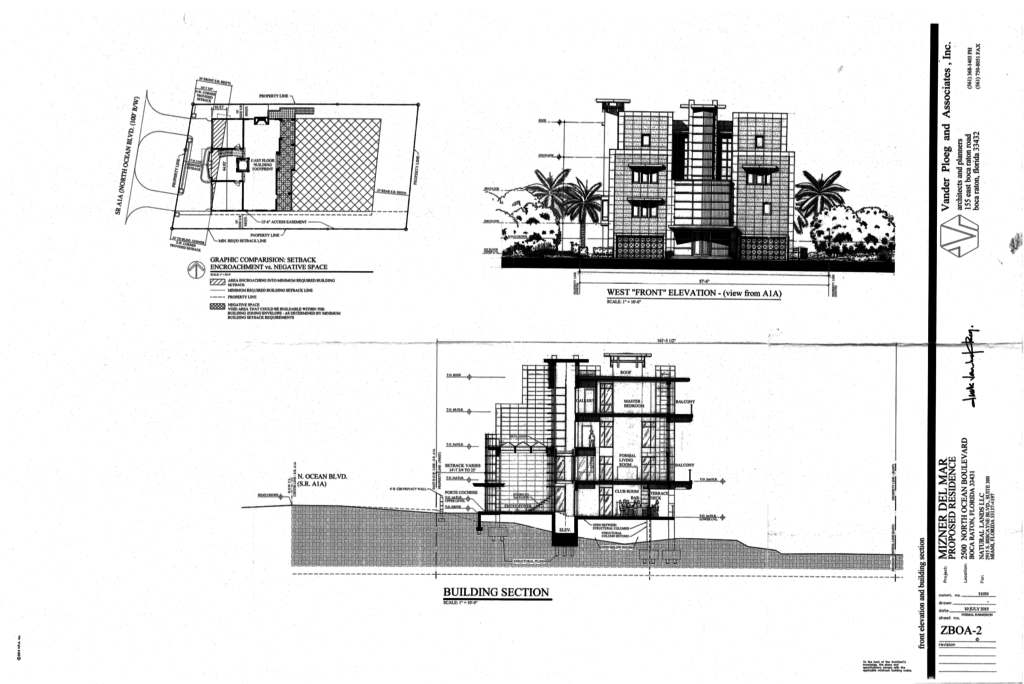