Esteemed Members of the Community Appearance Board,

Unfortunately, I can not attend tonight as I am out of town for the holidays. As you can imagine, so is most of the community given it is the week of Hanukkah &  Christmas. I would like to formally reaffirm Investments Limited’s Vehement Disapproval of this project.

It fails to meet the Architectural Guidelines of 4035 on many levels. The building is grossly over scaled relating to context and therefore violates the Spirit of the Downtown Comp Plan. I am including a visual that clearly depicts this project as one readable mass despite the deminimis minor separation of the middle portion of the building components. It lacks ALL OF THE MIZNERESQUE  Design strategies set forth in the 4035 code, and the further definitions in the Pattern Book where almost 50 pages describe how to make GOOD Large Buildings. This building is now worse than before. It reads as one massive block of unarticulated concrete. The beauty of the materiality in the most recent submittal is gone. Its roof line is truncated and under developed to meet the “”skyline” goals we have worked so hard to incorporate into our planning to make a good city.

Enough is enough. If Via Mizner’s original proposal for a 600’ solid “walled” building resulted in them being directed to redesign and thus creating a strong 3 building site parti with 75-100’ separations, then Mizner 200 should be directed to do the same. This project is almost 1000’ along Mizner. Imagine filling the voids between the buildings at Via and then adding 100’. This image has been sent to you before. It is one massive building. Too massive for our Downtown.

At the last meeting CAB Members unanimously requested several changes. Some have been incorporated, others have been ignored. They are underlined below.

Townhouses on Mizner Boulevard. – These have been added and will respond nicely to the street.

Break up Building into at least 3 distinct separated buildings to reduce scale and pressure to neighboring properties. Permit view, wind, sun passage ways between the buildings. – This has not been done. Although some effort to articulate and break the façade into clear segments has been done, it still reads as one solid mass along Mizner Blvd. Refer to visuals below. 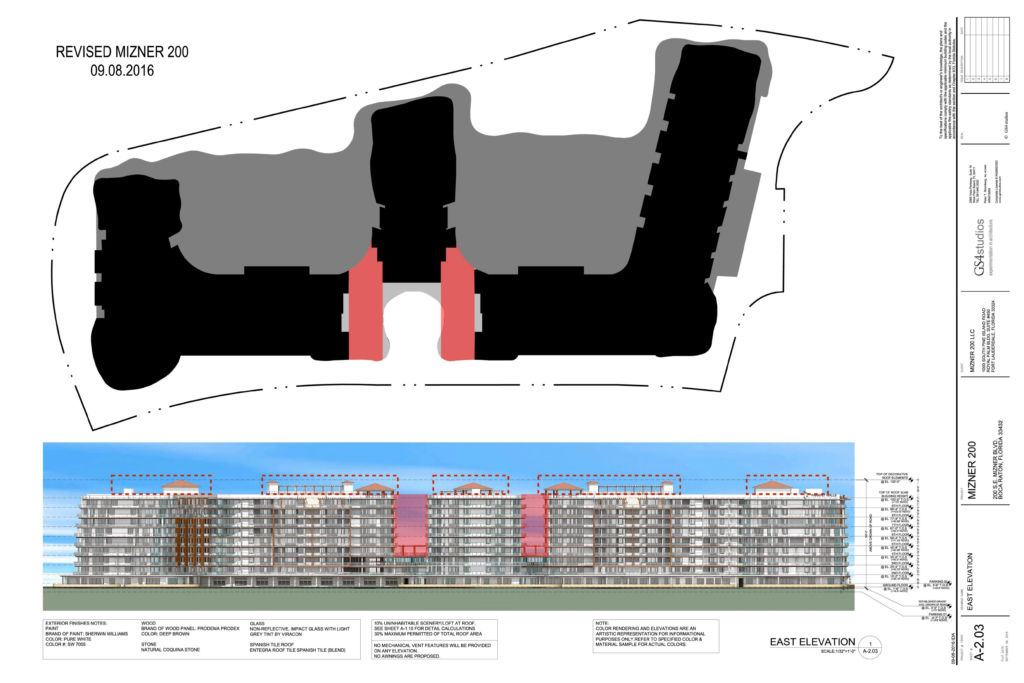 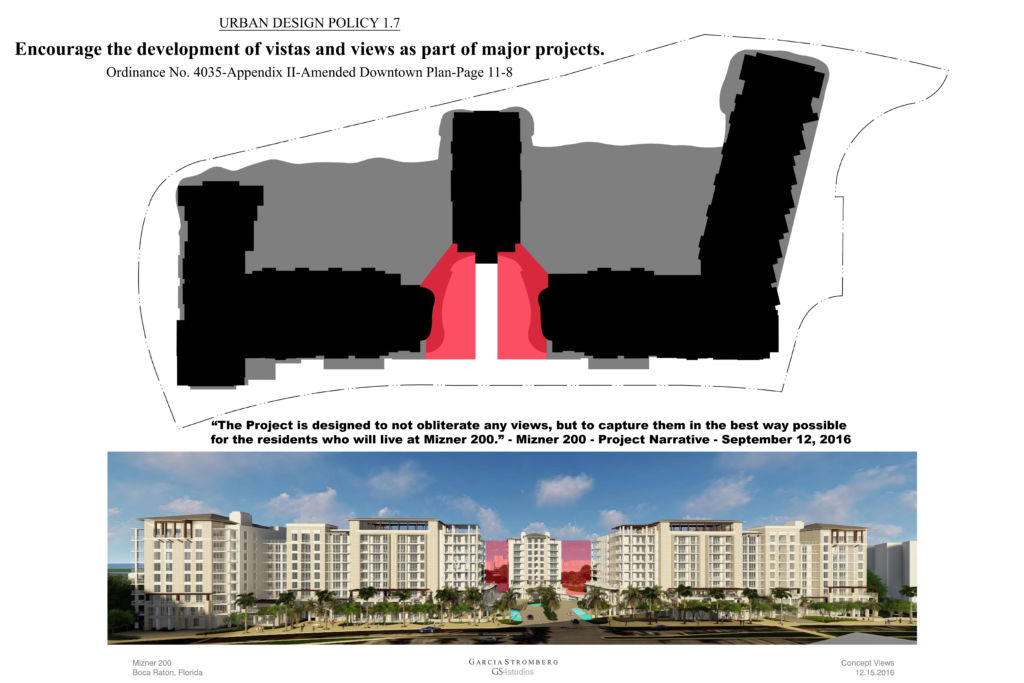 Incorporate strategic not cosmetic Mizner detailing. – The building has been stripped of any elegance. This building does not look like our City’s Brand and in my humble opinion is the weakest design of all previous submittals. Style is not the issue here. This is about articulation and detail. DESIGN MATTERS friends. We have spent many  nights together collaborating to make all of our projects better. This project needs a lot of collaborating. This endeavor ties directly to what the “Mizneresque” strategy is. 4035, the Pattern Book definitions and the History of Addison Mizner’s architectural compositions are clearly not evident in this design.

Vary Roof Lines – This also has not been done. It still looks like one long roof element. It is fair to say that the Owner is reticent of deleting any units on upper floors to achieve this but it can be done where the weakest views or tertiary parts of the building can justify it. These drawings are preliminary so it is impossible to discern how they intend to hide roof top equipment. The design solution will affect the roof portion.

Respond to Royal Palm Pedestrian cross walks at Mizner. The Applicant has not met with us to discuss. Numerous attempts were made but no meeting could ever be set. The imposing pressure to Townsend Place still has not been addressed.

You are to be commended for your remarkable commitment to our city. Your volunteering is critical to maintaining the aesthetic Brand of Boca Raton. Thank you for your service. I respect and appreciate you all.

Please reject Mizner 200’s submittal unless it meets all of the aforementioned City Code requirements and will become an enhanced element in our downtown.