Speaking to a crowd of some 150 attendees, Mr. Weinroth was enthusiastically received while explaining why he has decided to run for this county office.  Pictured below are the enthusiastic supporters who turned out for his kick-off event at Prezzo’s restaurant on north Military Trail in Boca Raton. 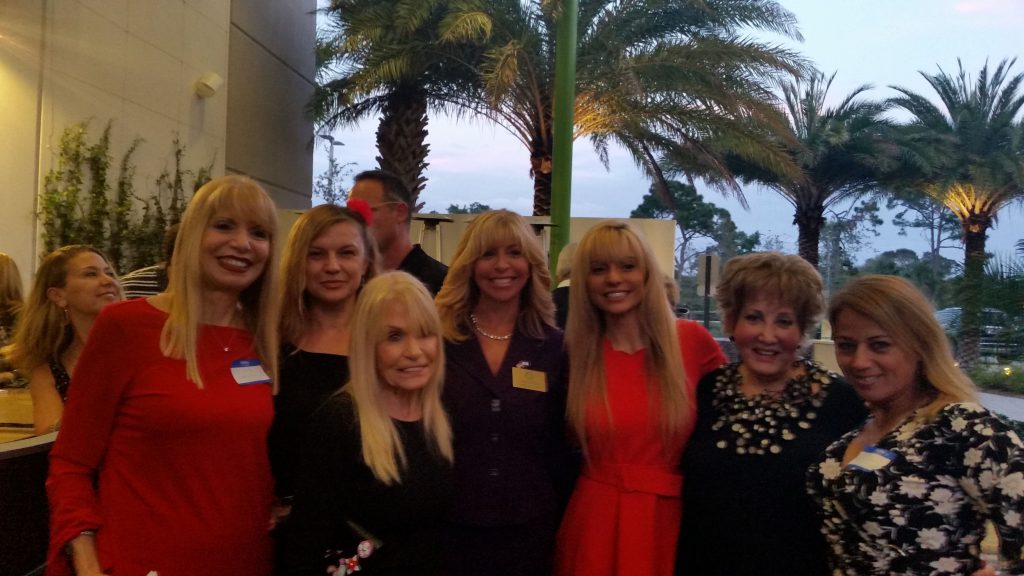 This County Commission race is a partisan contest with Mr. Weinroth, a registered Democrat, facing off against embattled registered Republican Susan Haynie.  Ms. Haynie will enjoy the advantage of being in elected office, Mayor Boca Raton, during the campaign.   Being in office provides Ms. Haynie with a platform that will endear her to the developer/donor class who have or may have development interests in front of the City Council between now and her resignation date expected in November 2018.

Mr. Weinroth, by withdrawing from the Boca Raton City Council race, will, as of the end of March, no longer have a vote on any government body.  This will give Ms. Haynie clear advantage as the developer/donor class will no longer seek audience with Mr. Weinroth to gain advantage for projects they may have in the Boca Raton development pipeline.   Due to his withdrawal, Mr. Weinroth will be returning all previously received campaign contributions (over $105,000) made to his City Council campaign, much of which came from the development/donor community.  Returning these funds is required due to his voluntary withdrawal from the city race.  It will be interesting to see where the developer/donor money will now go….Haynie or Weinroth…More on this as the campaigns file their contribution disclosure reports over the next few months.

Embattled by her ethics, Ms. Haynie is at her own disadvantage.   She is currently being investigated by numerous agencies for alleged unethical practices and her undisclosed financial dealings with the largest landowner/developer in Boca Raton; facts and circumstances uncovered and reported upon by the Palm Beach Post investigative journalism articles in November and December 2017.

The qualifying date for this County Commission race is open until June.  Rumors are swirling that others are interested in this seat.  Although officially denied, Ms. Haynie is rumored to be withdrawing from this race before the qualifying period ends; rumored that she is holding the seat for termed out State Representative Bill Hager’s entry after this Tallahassee legislative session ends.  Of course, Ms. Haynie vehemently denies this rumor.  She denies this rumor with the same vigor, the same straight face expression, she used during last year’s Mayor Race when she lied to Boca Raton residents promising that she would serve her full term as Mayor and denying that she would resign as Mayor to run for the county seat.  Shame, shame….

What a natural Segway>>>>

The second event hosted this week is by the Republican Federated Women of South Florida; a dinner on Thursday evening, January 25th at the Boca Country Club on North Congress Avenue. 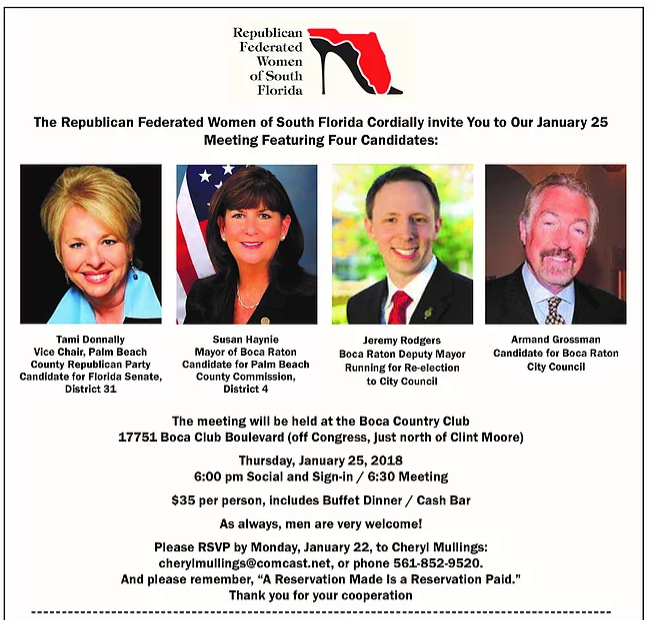 There appears to be a partisan influence being introduced into the non-partisan City Council races.  Jeremy Rodgers and Armand Grossman are members of the Republican Executive Committee (REC) and at the last REC meeting, along with Councilman Scott Singer endorsed Susan Haynie for this partisan seat on the County Commission.

To date, neither Deputy Mayor Jeremy Rodgers nor CRA Chairman Scott Singer has taken any action on behalf of the residents to investigate the unethical practices uncovered about Susan Haynie in the Post’s articles.   No action at all have been taken by these elected officials to address the reported ethics matters of Ms. Haynie that, if true, are a breach of the public trust, or worse yet, a blatant public corruption.   Yet, no action has been taken and Ms. Haynie remains on the City Council making decisions and making policy that requires ethical votes.

Meanwhile, in spite of this dereliction of duty owed the residents,  Mr. Rodgers seeks the residents’ vote to return him to office.  More on this shortly when BocaWatch publishes a candidate profile on Mr. Rodgers.  Mr. Rodgers has been invited to send in his candidate vitae and platform.  He is scheduled for a video interview in early February to possibly clear up these and other matters for the voter’s informed decision.

Mr. Grossman, also a member of the Republican Executive Committee, has also endorsed the candidacy of embattled, ethically challenged Susan Haynie.   His endorsement of Susan Haynie is published in her January 31st campaign event announcement.  With this endorsement, Grossman is clearly demonstrating a willingness to overlook the local and state agencies investigating these ethics matters.   Without further explanation from Mr. Grossman on his endorsement, Boca Raton voters should soundly reject him at the ballot box in March 2018, the first elections to be held affecting Boca Raton on a city wide basis this election cycle.

Candidate Grossman has been invited to sit for an interview with BocaWatch where he can provide insight on his platforms, his governing philosophy and his qualifications.  For the last 10 years, he has been relatively silent on local government matters in Boca Raton.  He did enter the city council race a few years back but withdrew his candidacy within weeks of entry after an opposition mailer highlighting some questionable business matters was received in Boca Raton mailboxes.  BocaWatch is compiling a candidate profile and will publish this shortly in order for the voting audience to make an informed decision in the Seat D City council race.

Mr. Grossman has announced a February 1st fundraiser but BocaWatch has not received the invitation for publication at this time.  What has been observed, however, is that Mr. Grossman is being embraced by Jim Batmasian, Boca’s largest landowner and developer, the landowner/developer at the center of the Susan Haynie ethic matters described above.  He also is on record opposing last year’s citizen referendum preserving all Intracoastal Waterfront parks for recreation purposes.  He is on record advocating for commercialization of the Wildflower site by questioning the wisdom of the 28,000+ members of the public voting for that referendum question.  Also, he has an affirmative history with a major developer in the downtown community whose projects are contributing to the overdevelopment and traffic concerns experienced throughout Boca Raton.

That’s it folks for the report after the first two weeks since qualifying ended for the City Council races. It certainly will be very tell-tale to see how fast and deep the developer community will finance Mr. Grossman and Mr. Rodgers campaign efforts to insure them, the developers,  ‘developer friendly’ voices on the City Council.

Stay tuned folks….as has been said already, this is becoming very interesting… remember…

Your vote is your voice; let your voice be heard at the ballot box in March, 2018!