Maximum Profit Versus the Greater Good

Considering the two yearlong controversy generated by the proposed replacement for the Mizner on the Green apartment complex, BocaWatch has worked with a team of professionals to present an objective citizen review of the latest developer iteration for this property, Mizner 200.  Mizner 200 is located on Mizner Blvd. south of Palmetto Park Road and directly across from the Royal Palm Plaza.

After extensive analysis and interpretation of Boca Raton’s controlling legislation and guidelines, the conclusion reached is that this project, as currently proposed, should again be rejected and sent back to the drawing boards.   Ordinance 4035, Ordinance 5052, the Pattern Book, and the Interim Design guidelines all demonstrate an overriding principal; a principal requiring that any project, especially a project of this mass and density, must be compatible with its surrounds and, this project, as presented, does not meet that controlling sentiment.

Presented here is the final analysis prepared in support of its conclusion.  Also, within its pages are suggestions on how this project, Mizner 200, might go about achieving these compatibility standards.

All due respect is paid to the professionals who have designed the current petition but maximizing developer profit is not and should not be the city’s prime directive.  Each and every project that wants the privilege of being part of what makes Boca Raton great must contribute significantly to that greatness.  Mizner 200 does not yet meet that mark.

In our White Paper we explained how Mizner 200-1st rendition failed to comply with the Urban Design Guidelines and Policies of the Downtown found in Appendix I and II to Ordinance N0. 4035.  We explained the urban design failure to be a building mass – a solid building wall 100 + feet high and almost 1,000 feet along Mizner Boulevard – incompatible with neighboring buildings and obscuring their views and vistas.  Read the Revised White Paper I On Mizner 200 here: ELAD WHITE PAPER

Mizner 200-1st rendition is the third submission by ELAD in two years of a building which the CRA cannot approve because it violates Ordinance No. 4035.

A second rendition of Mizner 200 was recently submitted and goes to the Community Appearance Board, the Planning and Zoning Board and the CRA next month.

Nothing much has changed.

Mizner 200-2nd rendition is the fourth submission in two years by ELAD of a building which the CRA cannot approve because it violates Ordinance No. 4035.

We have said for months and months that the urban design of Mizner 200 is fatally flawed and totally inconsistent with Ordinance No. 4035.

For months and months ELAD, its attorneys, its publicists, its bloggers have all repeated, ad nauseam, that Mizner 200 1st and 2nd renditions fully complies with Ordinance No. 4035.

For example, in a recent blog by Randy Schultz in Boca Magazine – ELAD Attorney Bonnie Miskal states regarding the Mizner 200-2nd rendition:

Referring to objections about the design Miskal said she has read Ordinance 4035 “at least 100 times,” and believes that no other downtown Boca project has adhered as much to it [Ordinance No. 4035] as Mizner 200.”

BOMBSHELL – All proposed Downtown buildings are reviewed for compliance with Ordinance No. 4035 by the CRA Urban Consultant, Calvin, Giordano & Associates, Inc. (“CG”).  In its July 31, 2016, Final Memorandum on Mizner 200-2nd Rendition, CG states with regard to the architectural/ urban design of Mizner 200- 2nd rendition: “not consistent.”

So there you have it. Two years, four buildings proposed and not one complies with Ordinance No. 4035 and is capable of being approved by the CRA.

Architecture and urban design is an art not a science. That is why the urban design principles are stated as concepts in Guidelines and Policies rather than as the strict rules like a setback of 6 feet or required open space of 40% found in the text of Ordinance No. 4035. The architect must present a building which complies with the strict rules of the text and reflects the architect’s subjective application of the Urban Design Guidelines and Policies.

What it comes down to is this: Mizner 200- 2nd rendition like the 1st rendition seeks to maximize for ELAD apartment size and apartment views of the golf course and the ocean. To do this, ELAD has intentionally and purposefully violated key points of the Urban Design Guidelines and Policies of the Downtown. ELAD puts its interests ahead of compliance with Ordinance No. 4035. ELAD puts its interests ahead of its neighboring properties.

To illustrate our point we have attached some studies of how we would apply the Urban Design Guidelines and Policies of the Downtown to ELAD’s 8 acre parcel. Our design would result in density, apartment size and views comparable with the neighboring properties in the Downtown. 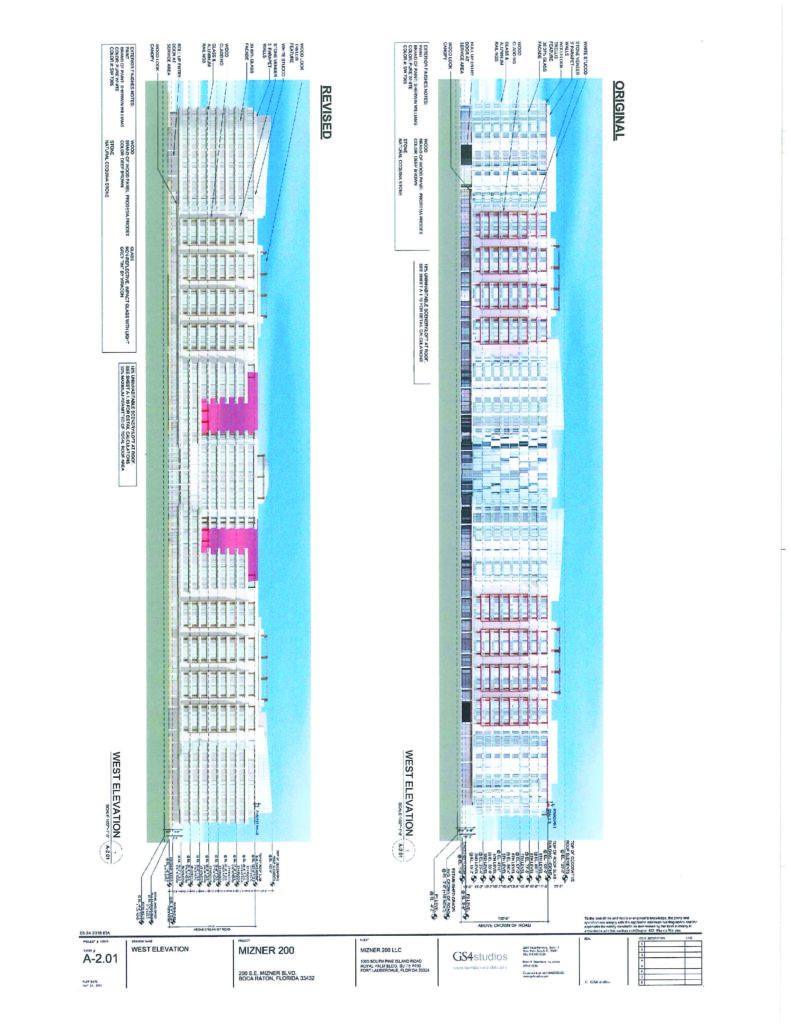 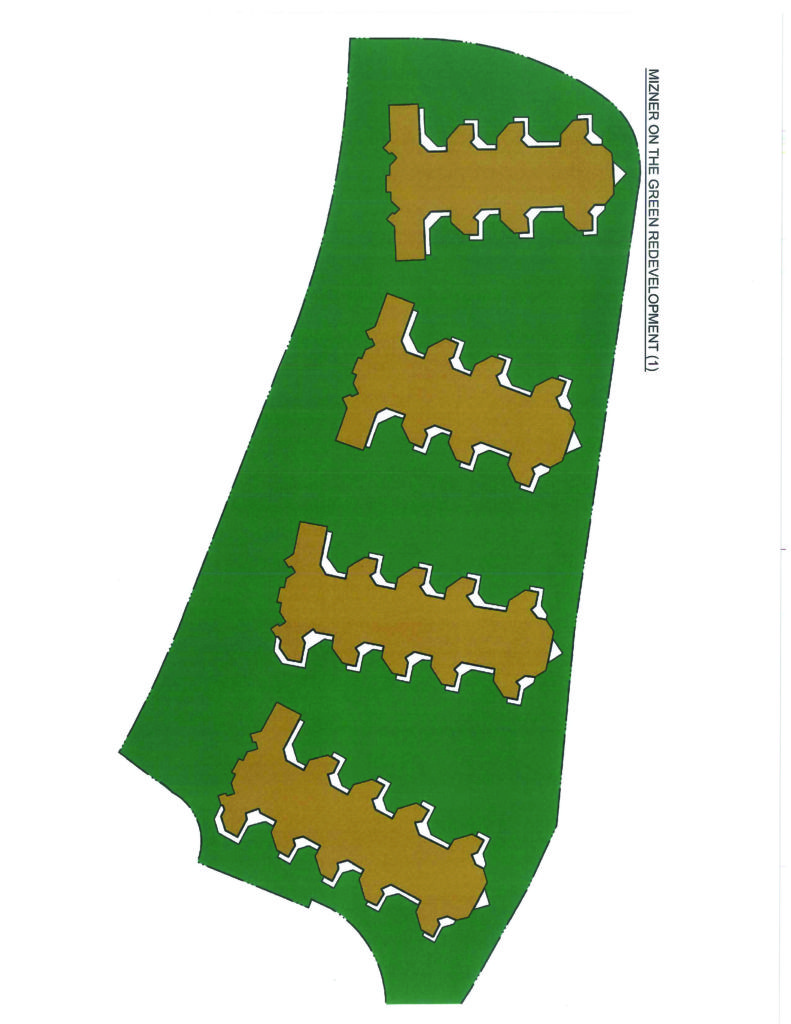 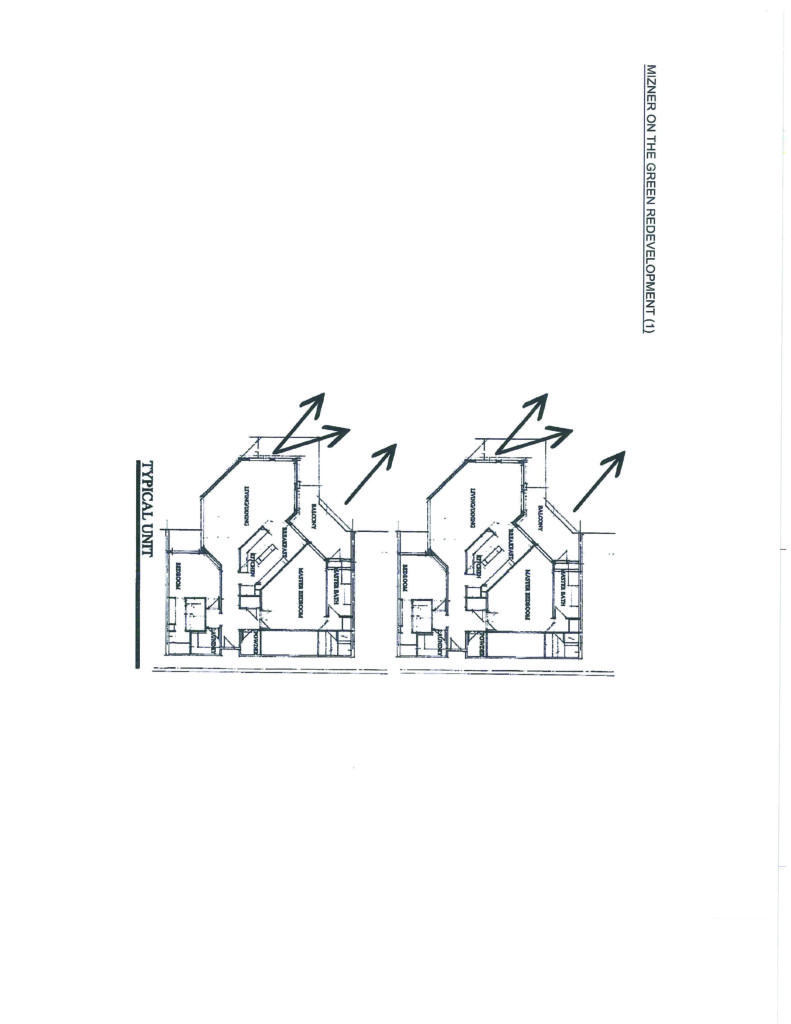 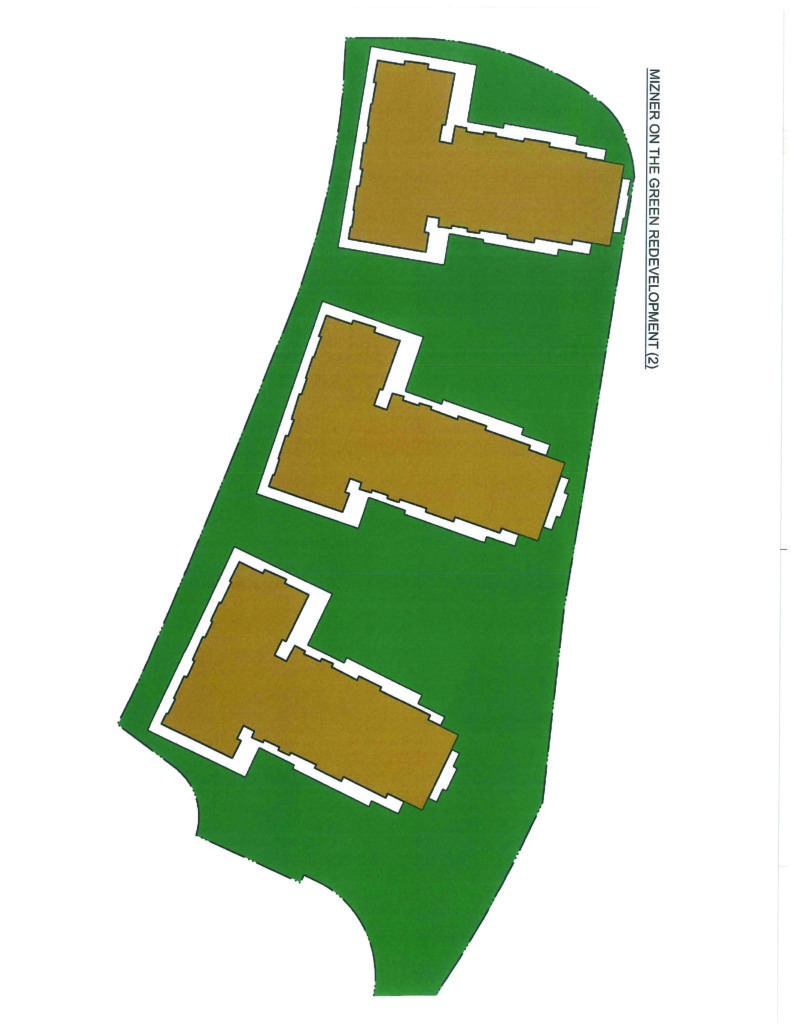 Compare our design to the design of Mizner 200-2nd rendition. A thousand designs, no two alike, can emerge from an architect’s faithful application of the Urban Design Guidelines and Policies of the Downtown.

Please call, write, text or e-mail the Boca Raton City Council, the Community Appearance Board and the Planning and Zoning Board. Let them know that you are fed up with ELAD wasting the valuable and limited resources of the City on buildings that do not belong in our Downtown.