We are amazed that the Boca Raton City Council continues to move forward with plans for a chain restaurant on the Wildflower site, while ignoring the sentiment of the citizens. Several citizen surveys have been presented to City Council regarding usage of the site and the results favor a park on the site. One survey conducted by the City in 2011 was reported by the City Staff to favor a restaurant over a park; however, due diligence on the details of that survey suggest that the City Staff’s reported results misrepresent the responses of the citizens. It is important to understand and correct this problem as the reported results of this survey were used to justify the decision to put a chain restaurant on the site. 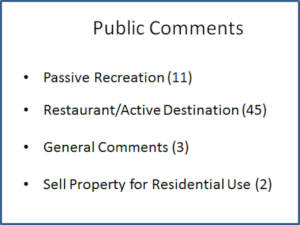 We performed due diligence on the City’s survey results by scoring the original citizen responses. 151 citizen responses were obtained from a public records request to the City in May, 2015. The details of how the City Staff scored the responses were obtained with a second public record request in September, 2015. The results of this request were a detailed log of every citizen response that was scored by the City Staff and the category to which every response was assigned. As a quality control check an independent scoring was also performed by Dr. Timothy Lenz, a professor in Florida Atlantic University’s Political Science Department. The results of these scorings as well as the City Staff’s scoring of the exact same survey responses are in the table below. Again, the three survey scores in the following table all operated with the same input data.

These tables highlight major problems with how the City Staff scored the survey responses. The first problem is that the City Staff used a very narrow definition of a park, i.e., Passive Recreation and a very broad definition of a restaurant, i.e., Restaurant/Active Destination. This allowed the City Staff’s presentation to give the appearance of high citizen demand for a restaurant. The scoring reported in lines 2 and 3 in the above table considered the intent of the citizen responses regarding a park or a restaurant. The next problem is the difference between line 1 and lines 2 and 3 in the total number of responses scored. An analysis of the citizen responses not scored by the City Staff shows that those responses that were not counted heavily favored a park.

By using Passive Recreation as a filtering criterion the City Staff significantly limited the number of citizen responses that they scored as favoring a park. On the other hand, by using Restaurant/Active Destination as a filtering criterion the City Staff was able to easily score the majority of responses as favoring a restaurant. For example, following is an actual response from two citizens that the City Staff scored in the Restaurant/Active Destination category.

QUESTIONS/COMMENTS: My husband and I are both longtime residents of Boca Raton and we both agree we would love to see a waterfront park with access to restrooms, a stage, concession area where the residents could use or reserve. We have used the island in Deerfield for birthday parties and it would be incredible to have a similar park for the City of Boca. (Great place for teens to have their battle of the bands!!) I was hoping Boca could continue to be a city within a park!

Clearly the intent of these citizens’ response is for the Wildflower site to be developed as a park; however, the City Staff scored the response in the Restaurant/Active Destination category. The number of responses scored in this category by the City Staff gave the appearance of a relatively large number of citizens favoring a restaurant when citizens really favored a park.

QUESTIONS/COMMENTS: I would like to see a passive park with places to picnic and watch the boats go by; maybe some pretty gardens and if room maybe a dock for a water taxi accommodating the local restaurants like in Ft Lauderdale.

This citizen’s survey response, as well as 16 similar responses, was not included by the City Staff in their survey scoring and presentation to the City Council.

If you agree with this conclusion, please contact your City Council