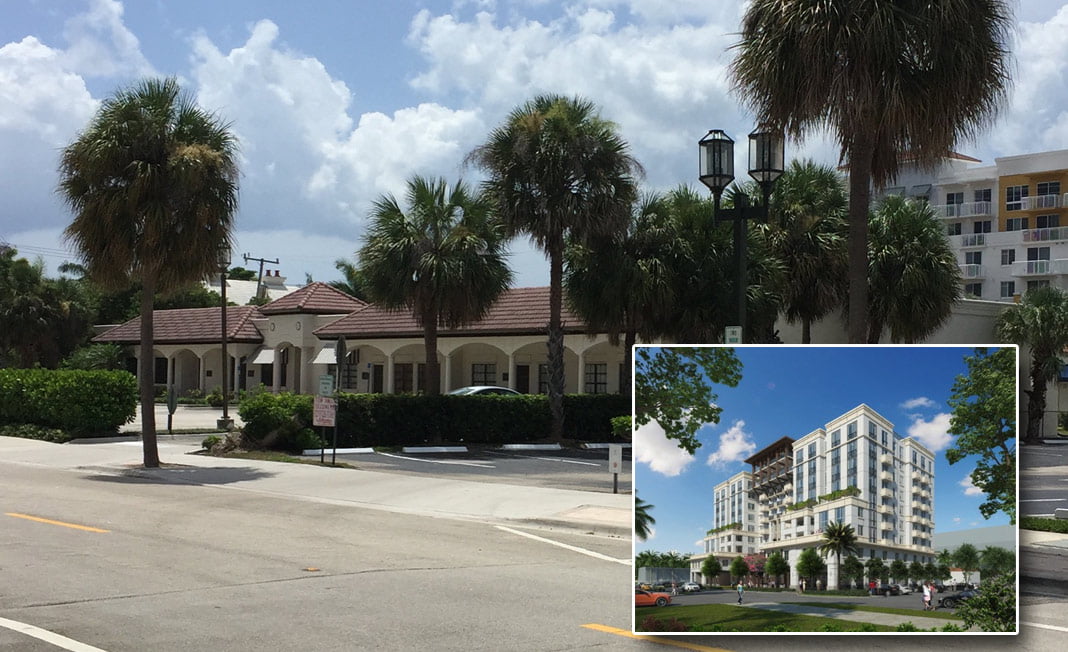 Coming before the Community Redevelopment Agency on July 23rd is an upscale, independent senior living facility project called The Concierge Living Facility. If approved, the project will be located at 22 SE 6th Street, in the downtown area just a few blocks south of Palmetto Park Road, between Dixie and Federal Highway. The building will contain 110 units with 129 beds, and of those units, about half are reserved for independent living while the other half are reserved for assisted living and a memory care unit. To date, the project has garnered approval from City Staff (and their external consultants), the Community Appearance Board (7-0), and the Planning and Zoning Board (5-2). However, some concerns were raised at the P&Z meeting by a few of the board members and one local resident. Taking a “pro/con” approach to the project, below is an outline of some of the main concerns and/or contributions associated with the project using information gathered from the P&Z meeting, local resident Mr. Bruce Diller Verstandig, Group P6 (the developer) and Charter Senior Living (the operator). We invite the community to voice their opinion on the project.

Health and Demographics: America’s population is aging and Boca is no exception. Census estimates suggest that the number of Americans 65 years or older is expected to nearly double over the next three decades, suggesting that facilities like the Concierge are increasingly going to become a social need. Further, demand aside, facilities like this are important in combating social isolation, which is directly associated with health outcomes, longevity, and quality of life. Social relationships such as family and friends, which can become more elusive with age, give life meaning and purpose. Further, having facilities like these in the community allows for the maintenance of intergenerational bonds, and the facility’s proximity to the downtown area allows those in independent living, and visitors, a nearby location to engage with.

Negative Secondary Effects: It is unlikely this project would result in issues such as drugs, crime, declining property values, or other social ills that fall under the NSE rubric. There is no residential immediately adjacent to the property, and rooftop entertainment was designed so that any sound or light pollution that does exist projects only in the direction of commercial areas.

Environmental Sustainability: The building meets the city’s requirement to have at least 40% open space on the property. Further, the building will have some type of green certification.

Social Responsibility: The developer, the landowner, and the operator are all invested in the success of the project. The developer and landowner live in and have raised/are raising their families right here in Boca Raton. The developer is also a member of the 2020 Vision, a Boca non-profit composed of a large cross-section of the community working to develop the Wildflower and Silver Palm Parks based on a public referendum. Although not from Boca, Kevin Benema, CEO of Charter Senior Living, has over 20 years industry experience and wants to maintain the reputation that has allowed them to grow to well over a dozen facilities.

Taxes and Schools: How much tax revenue could this project potentially produce? The city report presented to the P&Z Board suggested the number was only $100,000, which some were concerned might not be enough to cover the costs the project produces. However, data suggest this number is likely inaccurate. For example, tax records show that in 2017 the property owner paid $ 49,065 in taxes despite having only 8,000 sq. ft. currently built on the site. Given that the proposed project is well over 100,000 sq. ft., the tax revenue will necessarily be many multiples. The developer estimates the project will be assessed in the range of +/- $50MM. To play devil’s advocate, even if we cut that number in half, the project would still produce nearly $500K in yearly taxes, ~$175,000 of which would go directly to education and schools without adding a single student to local rosters.

Job Creation and Economic Stimulus: The facility itself will require at least a dozen employees, and it will likely draw a number of other professionals and services for things like medical, retail, and food. Given its downtown location, residents of the facility, especially those in independent living, are likely to engage in local activities and support local businesses. Additionally, it seems logical that those visiting facility residents would also contribute to local commerce. However, it is important to note that the P&Z Board expressed concern that the Boca facility might have too few employees, citing the extent of its services and high resident expectations. In response, the operator, speaking from his experience, pointed out that suggested staffing levels are industry standard and typical for a high-end facility of this type.

Emergency Medical Services: How much would adding this facility burden emergency medical services? Data reported by the city and Fire Rescue Services suggest that such facilities can generate up to 15 times as many calls for service than the average home. However, supporters of the project make a series of claims that, if true, would cast immediate doubt on the number just quoted. For example, the facility operator and data from the American Senior Housing Association argue that the vast majority of residents moving into such a facility already come from the same community. Thus, the project would not necessarily increase call rates but perhaps concentrate them. Further, having staff on the premises should reduce the number of calls – or deaths – that might have occurred otherwise. The city’s presentation seemed to suggest that the facility could require the city to add additional services at the cost of around $2 Million per year, but notably, the developer has since met with the Boca Raton Fire Department and confirmed they have adequate capacity as is.

Traffic and Parking: In regard to traffic, the project would be in a particularly low volume area and is expected to add 163 trips per day – much lower than comparable residential or commercial, which the property is currently zoned for. However, parking was perhaps the biggest concern expressed by the P&Z Board. Although the operator has included lease conditions that would prevent more than 40 resident spots, some board members questioned whether or not there is enough left over for visitors, staff, and doctors, who might have shifts with small overlaps. The operator contends, based on industry standards and experience, that the facility has more spots than most comparable projects. In addition to the facility providing multiple forms of transit, the operator claims that only about half of eligible residents bring cars anyways. Further, they note that in addition to limiting visitation from 7am-6pm, the days most likely to have high volume, such as Christmas, tend to be occasions when surrounding businesses would be closed.

Development: One of the concerns raised by local resident Mr. Diller Verstandig was whether or not the “land-swap” necessary for the project would constrain the ability of other landowners to build what they were originally zoned for and allowed to. However, my understanding is that, fortunately, this is basically a zero-sum game, which is to say that although the downtown area is allotted a fixed amount of certain properties by zone, zones can continue to trade with each other until some eventual point in the future when the entire downtown area runs out (at which point the city can decide to add more).

Mr. Diller Verstandig recognizes his phrasing is extreme, but argues that this project brings “death to downtown” because in addition to the economic concerns discussed above, the project does nothing to increase downtown vitality in the way that a comparable residential or commercial building might. At the other end of the spectrum, one might argue that, indeed, this is resident friendly, because in addition to the social value, this is a much better alternative to housing that will contribute to overdevelopment and further burden our schools, or offices, which arguably already overpopulate the area. As stated at the beginning, we invite the community to voice their support, concerns, or comments about the project here, and look forward to your input.