Home Boca Raton Development Houston’s on the Wildflower Site a Done Deal ….WE THINK NOT!!!!!

At the bottom of the Facebook thread below a sitting member of the Planning and Zoning Board, Glenn Gromann, states that Houston’s restaurant is a “done deal” on the Wildflower site. That statement conflicts with Page 7 of the attached  Development Services Report (see below), which requires a Comp Plan Change, as well as being in conflict with the video recorded testimony of the City Manager (see below) .

Mr. Gromann’s statement is not only wrong, but clearly improper.   As a member of the P&Z quasi-judicial board, he is obliged to make informed decisions based upon the record evidence presented at a public hearing on the issue; to wit: a hearing that has not yet been scheduled for presentation to the P&Z Board.

His statements clearly demonstrate a predisposition on this matter and this predetermination must disqualify him from participating in the official discussion of the Houston Restaurant application.

Also, after you, the reader, review the provided City Council Workshop video….one can only describe the logic as…..asinine…..

The City Manager, on February 9th, stated that the traffic study for the intersection of Palmetto Park Road and N.E. 5th Ave will not be concluded until the end of the year while the Wildflower site will be brought for final action in the May–June time frame…..really????

Considering the public concerns about this intersection, how can the Wildflower property be a done deal…..talk about putting the cart before the horse……Not to mention that this study needs to be conducted during the seasonal months, not during the summer months!

One final note….of all the supposed facts stated by Mr. Gromann, the one fact most important but not stated is that there are no final agreed upon terms nor is there a signed contract between the parties…..Hence, the RFP can easily be rescinded…..

So do not be fooled….this deal is by no means a done deal and if the BocaWatch – Old Boca 2 survey of this past weekend is reflective….we, the citizens, demand a different outcome then that of just another eatery, whether on the waterfront or not…

Excerpts from an Facebook thread dated March 1st and 2nd…..

·  Mia Krauss That sounds like you are fine with building a Houston’s at Wildflower as long as they rpovide a dock for the megaboats that will park there….except of course, the citizens would prefer to have access to the water at Wildflowers…I am still undecided about this election and am listening carefully to the “between the lines” stuff….please state your position on the Wildflower property on whether it should be made a park for the citizens whose tax dollars actually bought it, or sell it to the highest bidder so only the few can use it…..and cmpletely tie up the Palmetto, 5th Avenue intersection forever….
March 1 at 7:18am · Like
·  Jeremy Rodgers Mia, there is no between the lines and you can ask me directly anytime you’d like. I liked Lynore’s idea of a park and food trucks, and I like Andrea’s ideas of turning it into an active kayak rental/paddleboard rental (that is something missing in the city, should be explored more), but as I understand it, the process is moving forward as a restaurant and terms are already being negotiated. One councilmember isn’t going to change that. More importantly, I think the case can be made that a waterfront dining experience is sorely lacking in Boca. I think securing public access to walk/bike the waterside and opening up waterfront dining likely results in more people enjoying the space than even a park.
What I can commit to is making sure Silver Palm is protected, both their dockage and parking, and that traffic issues are mitigated at what is a messy intersection already. I think the best way we do that is insisting on docks [and maybe a boardwalk] publicly accessible behind the restaurant site, looking for traffic solutions, and insisting that silver palm park does not turn into Houstons park-ing. The private property on the SW corner could likely lease parking to Mizner, and two other nearby adjoining properties are being considered. I realize we may have some difference of opinion here, I hope you appreciate the honesty, I’d be interested to hear how you think the new councilperson should move forward.
March 1 at 11:47am · Like

·  Jeremy Rodgers It was my impression they agreed on a lease and terms but full site plan not accepted; I’m not positive though, I’ll find out. That was at the meeting where many people spoke up on it — it was actually a pretty positive meeting on all sides and one of the better attended meetings with a lot of great input from residents. If anyone else a more definitive answer, please chip in Andrea George Anthony Al.
March 1 at 11:53am · Like

·  Mia Krauss What Palmetto needs is a fly-over to A1A like Deerfield has..I remember the Mayor laughing about the flyover to nowhere….
March 1 at 11:53am · Like · 1

·  Andrea Levine O’Rourke It’s always a wonderful thing to have open discussion that includes the residents at anytime. However the timing of Park vs Houston’s is a bit off. Houston’s was already approved and is in the approval/lease negotiation phase. They do have many obstacles to overcome re: parking, dockage and the already unsafe intersection of Palmetto & 5th (just west of the bridge). Add that to the controversy from Silver Palm park and the boaters, there will be some real challenges for Houston’s to overcome. But from the posts going on on Old Boca 2 this weekend, it is pretty clear that the residents strongly favor a park. Not to say I won’t enjoy walking to Houston’s from my house if they can get it “all” worked out…but in my opinion and for what it’s worth, I am in favor of a beautifully designed urban, active, green space with snack shack, boat and kayak rentals, scuptures and more. Let’s all stayed tuned…
March 1 at 3:35pm · Edited · Like

·  Joe Panella What worries me is the finances. Look at Mizner Park-a great destination but a massive financial failure for the taxpayers. If an eatery at Wildflower is going to be so viable financially, why would no business person touch it? Also, when the numbers go south the councilors will be long gone and the only choice will be to tax us further in order to keep the books balanced. The city should not be in the real estate biz. That said, I hope when you are elected you will delay the final outcome at least until such time it can be proved that this will be a plus for taxpayers…….
March 2 at 7:57am · Like · 1

·  Glenn E. Gromann The Houston’s project is a done deal not sure where everyone has been so let’s look at the facts: 1) The RFP had NO requirement for docks; 2) There have NEVER been boats docked at the Wildflower location to include the four (4) different restaurants/owners located there including the old Wildflower; (5) you cannot put docks in that close a proximity to the bridge–the Army Corps of Engineers would never allow it; (6) NOTHING is happening to the boat ramp at Silver Palm Park, there is typically a park ranger present to prevent folks from tying up there–no one ever tied up on the Silver Palm side dock to go to the Wildflower and never was a problem in the past; (7) Almost 40% of the people who use the boat ramp DO NOT LIVE IN THE CITY OF BOCA RATON as they have County permits issued as part of the requirement to do the same as part of the orginal acquistion; (8) the site plan was submitted for approval several months ago (all online on the City website) and Hillstone has already agreed to put whatever dockage it can to the north of the property; (9) a $500K per year ground lease plus a percentage rent (% of gross sales) could effectively yeild $900K per year in rent–that puts this deal in the top 1% of ground lease deals for what is going there–in the country. There is no park, no one ever proposed such a use at the City. Again this is a done deal and will cause an immediate increase in home values in the area due to walking distance to one of the best restaurant chains in the US.
March 2 at 8:53pm · Edited · Like

Glenn E. Gromann I understand your perspective and argument Mia. The State Legislature has enacted laws that prevent votes on development orders as you suggest. Sometimes its a double edged sword. Houston’s must file federal tax returns and do audited financial statements. Wildflower property had always been a restuarant use as well as the Maxwell’s chophouse property–also now vacant. I am surprised that there would be so much opposition. Further, there are many, many new developments in the pipleline that are entitled as a matter of right where extra height and other things are not sought. Two 100′ buildings on the backside of Royal Palm Road, the Chabad, new two story office by City Hall (yellow signs are up)? What is the perspective on that type of thing. If not aspproved the City would be liable to the owner as a “taking” under constitutional law.
March 2 at 9:41pm · Edited · Like 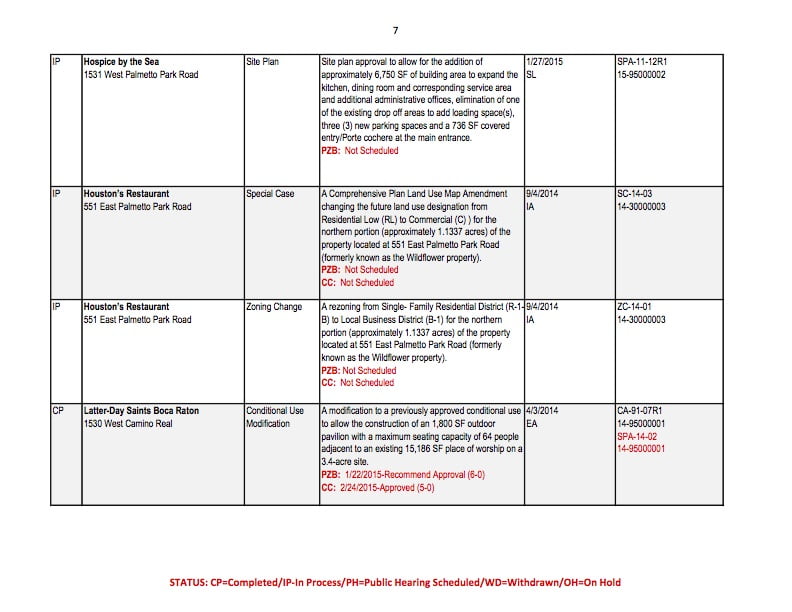