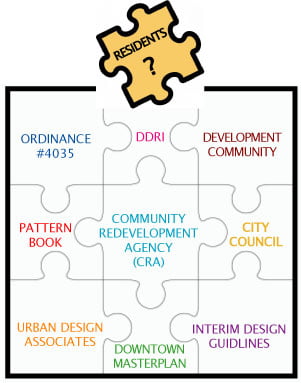 If you have looked at the new construction going on in downtown Boca Raton and thought to yourself; WOW! These buildings are getting taller! You are not alone. Based on recent postings on the Facebook site “Old Boca 2”, plenty of folks have expressed their concern as to where Boca development is headed. A significantly lesser number of folks have expressed their support for this expansion. A front page article in the Sun Sentinel in last August was the catalyst to really get the community talking to one another. That article made the public aware of a proposed four building project situated in the downtown that would virtually quadruple the existing building height limits.

So what does the building code for Boca Raton really tell us? That depends on what area of the City you are discussing. Officially, the building height limit is one hundred feet, period. This height has been the standard for decades. However, thanks to an amendment to City Ordinance 4035 several years ago, buildings in the City’s downtown can reach as high as one hundred and sixty feet, as long as the average overall “average” height of the building is one hundred feet. That change is an “interim guideline”, as in the pattern book and has not been officially adopted by city code.. The change that occurred is what makes the story of building heights in Boca confusing and all the more interesting. From a writer’s perspective, the challenge is to make the information less confusing while delivering meaningful facts.

Certain facts are undeniable. The City of Boca Raton is, and has been, a world class city with solid financials and AAA bond rating. To listen to some of the rhetoric from those that benefit from greater building heights you would think that Boca is in dire need of development that makes a “grand” statement and promises “much needed” tax inflows to the City’s coffers. They are certain to point out that all “great” cities have a meaningful structure that sets them apart. Seldom do they speak of threatening the quality of life which is why most of the residents are here in the first place. For the majority of developers, bigger is always better. In contrast to that, what’s so wrong with Carmel, California or Santa Barbara, Laguna Beach or even Delray Beach? You could create a long list of other cities or towns that have charm and character without height and density. In their own right, these are also “great” cities. All of which have building height limitations less than our “official” limit of one hundred feet.

The City of Boca, like many cities, created a Downtown Development of Regional Impact or DDRI as a governing source of rules for developing a specifically defined downtown area under the rules put forth in Ordinance 4035. This occurred in the 1988. With the creation of the DDRI the City created the Community Redevelopment Agency, or CRA, whose sole purpose is development issues in the downtown. The CRA is comprised of current City Council Members. In 2007 the city hired as consultants Urban Design Associates, or UDA, to make suggestions as to how our downtown cityscape may be improved. From that came a Downtown Master Plan, and from that came a Pattern Book and Interim Design Guidelines (IDG) which got us to the one hundred and sixty feet limit. All of which has led to some confusion as to what rules apply and where. The cynic may conclude that the resultant confusion is intentional.

Incidentally, that one hundred and sixty foot limit was first introduced as a “Landmark Building” in one location only – the southeast corner of East Palmetto Park Road and Federal Highway. That is how it was presented to the CRA and City Council in public hearings. The final language, however, is ambiguous and allows wiggle room for this new limit to be in all of the downtown. We now have four such projects approved, The Mark and Via Mizner, Tower 155 and the Hyatt Hotel What do think the odds are that more will be coming?