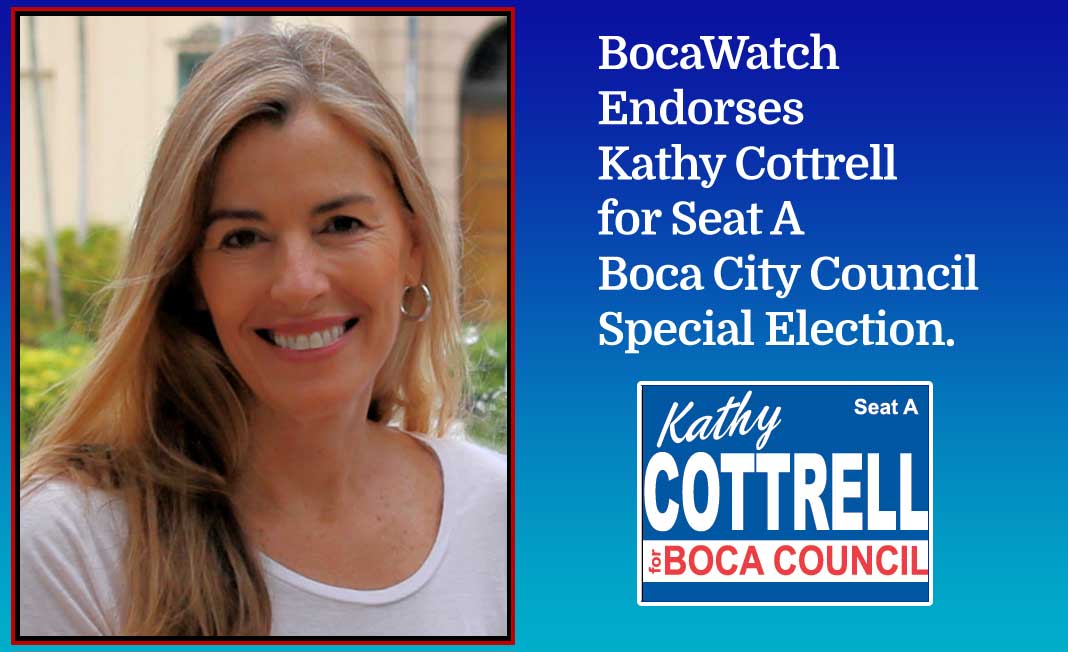 Since its beginnings BocaWatch has attempted to identify the candidates that will best represent the residents of Boca Raton. Candidate Kathy Cottrell is the easy choice for BocaWatch based on her education, career experience, strong local roots and commitment to our community and its residents. Perhaps most important, Ms. Cottrell stands head and shoulder above her opponents on the issue of integrity.

Ms. Cottrell is a Boca Raton native and one of four generations of family living in our city. She has volunteered to serve on city boards and has attended countless City Council and Planning & Zoning meetings over the past several years. Born and raised in Boca Raton and a product of Boca’s public school system, Ms. Cottrell brings a positive, and unique perspective not found in her opponent’s backgrounds. Her impeccable credentials speak for themselves and will serve her, and the citizens of Boca, well once she is elected to City Council. Ms. Cottrell’s guideposts of professional integrity and ethical behavior will be a welcome addition to the governance of Boca Raton.

Ms. McKee is a twenty-year resident of Boca Raton and this year began attending City Council meetings. As a candidate she presents an interesting perspective since two of her top priorities, permit streamlining and fiscal issues, are not of major concern to the residents of Boca Raton. In fact, the city is currently addressing the permitting process and the city’s fiscal condition is on solid footing as evidenced by our relatively low property tax rate and AAA bond rating.

Her past experience serving as a volunteer on city boards and others are a plus. However, most troubling when considering Ms. McKee, is the issue of integrity. This is highlighted by a recent Youtube video interview of McKee conducted by another website. During the interview two statements by Mckee regarding BocaWatch were untrue. First, was her claim that BocaWatch refused to interview her. All candidates for Seat A were invited for interviews. McKee failed to appear on two separate occasions. The second, and most bizarre was her claim that she was a long-time contributor to BocaWatch. Her direct quote “Involved member of BocaWatch before any of my opponents even lived in Boca Raton”. The truth is that no one involved with BocaWatch for more than a year had ever heard of Tamara McKee (or Tamara Jones) until her announced desire to run for office. Further, she has never been a contributor to BocaWatch. Ms. McKee’s lack of honesty and integrity disqualifies her for consideration for City Council Seat A.

Andy Thomson is now a two-year resident of Boca Raton and this is his second attempt to gain a seat on City Council after his failed attempt in 2017. Since then, Mr. Thomson has been busy networking within the elites of Boca Raton. However, the same issues that led to Thomson’s defeat last year still plague him in 2018. He is the least resident-friendly candidate in this race. Despite his claims to the contrary, Thomson is heavily funded by special interests. A full 48% of his funds raised to date, come from developer and legal related entities.

Thomson is the only candidate running for city council Seat A that feels suspended Mayor Susan Haynie should not have resigned during her recent ethics challenges. Until her removal from office, Haynie and Thomson shared the same political consultant, Rick Asnani of Cornerstone Solutions. Mr. Thomson position on this issue is an indication that cronyism may be more important to him than sound judgement. As in the case of Tamara McKee, Thomson also has integrity issues. With recent robo calls and campaign literature he is advertising himself as being prominent in finding solutions for school overcrowding primarily due to his appointment to the city’s newly formed Educational Task Force. The facts are that Mr. Thomson had nothing at all to do with finding solutions to this problem. During Thomson’s brief time on the task force (forced to resign due to his campaign) three meetings were conducted. The first was an introduction and organizational meeting and Thomson only attended two of the three meetings. Exaggerating your accomplishments is one thing, claiming an accomplishment that did not happen is another. Voters that are looking for a resident-friendly candidate should not consider Andy Thomson.