According to the Boca Raton Chamber of Commerce’s President, Troy McLellan, of all the needed critical items to enhance economic development in our city and its surrounds, the local government’s decision process concerning the “Wildflower” property at the failed intersection of Palmetto Park Rd. and NE 5th Ave is of critical importance.

Mr. McLellan, in two recently published articles, has decided to engage Chamber members in the controversial issue of what should be the outcome for this City- owned waterfront site. Perhaps, in all the matters that might benefit economic development and attract new corporate relocation, he sees as a critical need for another venue to host the endless stream of breakfasts, lunches, dinners and social engagements which dominate the activities of this Chamber.

In the April – June issue of the Chamber’s publication, “Connection”, a stern looking Mr. McLellan states that the Chamber’s mission is to “actively develop and promote policy positions on critical issues impacting the business community…” Specifically listed as one of these ‘critical issues’ is to “….monetize the City-owned former “Wildflower” property to receive a tax payer return on investment…”; a clearly dubious statement based upon a misrepresentation to the audience he solicits for support.

In a recent e-mail message (see attachment below), he, in a more cordial picture portrayal, again solicits the help of Chamber Members and Community Stakeholders to advance the critical issue of monetizing the “Wildflower” site. As support for this request he states that “In 2012, the property was designated to include a free standing restaurant under a land lease arrangement; an absolute misrepresentation of the historical facts on the public record.

At the time of purchase, this acquisition was justified by the then City Council as a place for the enjoyment of the many residents who would use the location for recreational purposes.   There is no public record suggesting that the purchase was intended for a land lease to a private commercial restaurateur, the Hillstone group or any other restaurant. Let me repeat…there is no public record that has been found supporting the assertion that the site was purchased for commercial development.

What has happened over the years is that the City Council has redirected the conversation suggesting that a standalone restaurant was the intended use for the property. The Council has met great push back from the residents but has continued to act over the objection of many and in light of various surveys resulting in the unequivocal support for a green space containing activities including a food element for families to take advantage of Boca Raton’s waterfront.

Mr. McLellan goes on to misstate the facts by asserting that the downtown would be “energized” by a “premier waterfront restaurant”…and help create a sense of place in our emerging downtown. His statement suggests that, at this time, there is no alternative Boca Raton waterfront restaurant, an incorrect assertion; to wit: The Waterstone.

To the issue of creating a sense of place, one need only look at the concrete jungle that has become the essence of our emerging downtown; a direct result of the attitude that business and developer interests take priority over the quality of life that has branded Boca Raton as the desirable destination it is. This attitude is evidenced in many ways….

With some 2500 new apartment units either already out of the ground or coming in the near future, there has been no effort by the city leaders to address the lack of urban active green space to enhance the living experience of these newly arriving ‘downtowners’.   The Wildflower site offers that possibility; a mere restaurant does nothing to afford the urban experience suggested in the justifications at the time of purchase. There is no doubt as to the truth of this statement.

Mr. McLellan ends with a call to action for the Chamber members to contact the City Council in a show of support to:

What Are The Goals?

These goals are not inconsistent with the idea of an active urban green space for the enjoyment of all the residents, not just the privileged few who can afford the expensive dining experience which may result from the current negotiations between the city and the private sector.

BocaWatch suggests that the Chamber stick to the business of true economic development and attracting new corporate interests to Boca Raton.

In a recent ‘Coffee and Conversation’ hosted by Councilman Scott Singer, a high ranking member of the Chamber publically stated that new commercial properties within the City may be decades away.

For an City that touts as its objective the notion of being a place to ‘live, work and play’, the place to ‘live’ has advanced to the point of congestion but the idea of offering a place to ‘work’ is clearly missing. The idea of providing a place to ‘play’ is being drowned out by the Chamber’s clamor to have a restaurant on the only public waterfront site in or near the downtown available for this purpose….

Oh my, perhaps overlooked is the possibility that this restaurant does offer employment but for the very few, just as it also offers the few, ‘play’ activities at the most significant waterfront site in our city for all residents to enjoy.

In baseball, batting .333 gets you a major league contract; in politics this represents a failing grade.

Thank you Mr. McLellan for this opportunity for me to argue to the residents that ‘quality of life’ and ‘enhancing our downtown’ is by no means within the scope of the Chamber’s position.

BocaWatch encourages you to contact the Mayor and City Council members and express your feelings concerning the eventual use of the ‘Wildflower’ site; to wit an extensive standalone restaurant or an active, recreational, urban green space.

BocaWatch also encourages that this item be put on the ballot as a referendum question in the March, 2017 elections to, once and for all, identify the will of the people and direct the public servants to implement that will.

Chamber of Commerce letter noted above 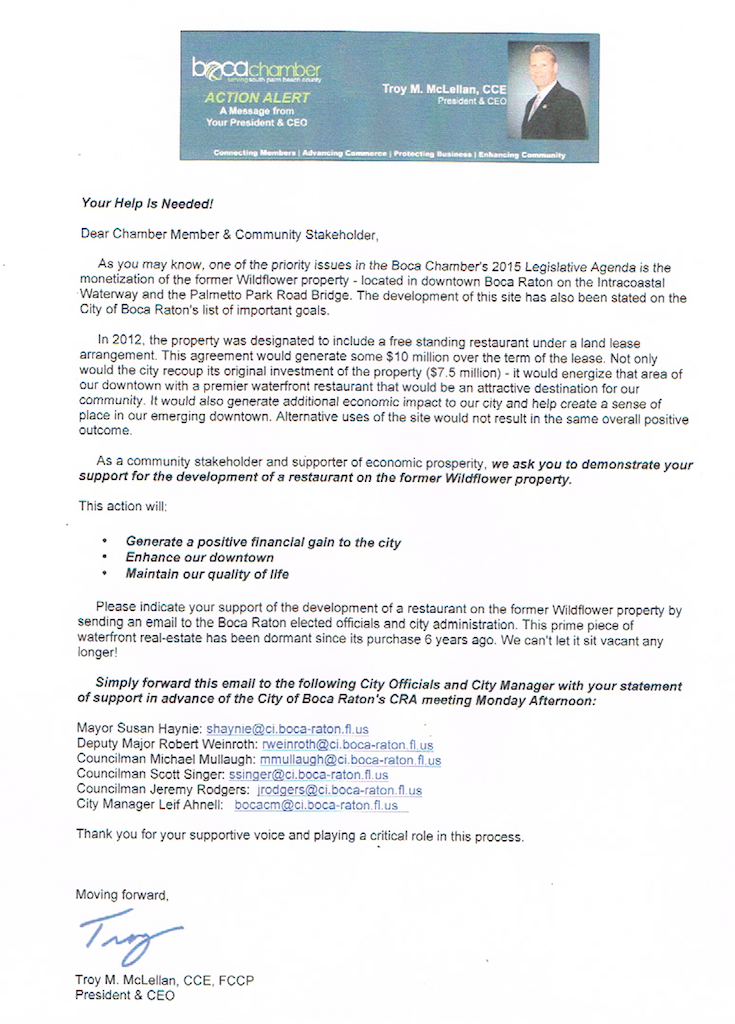