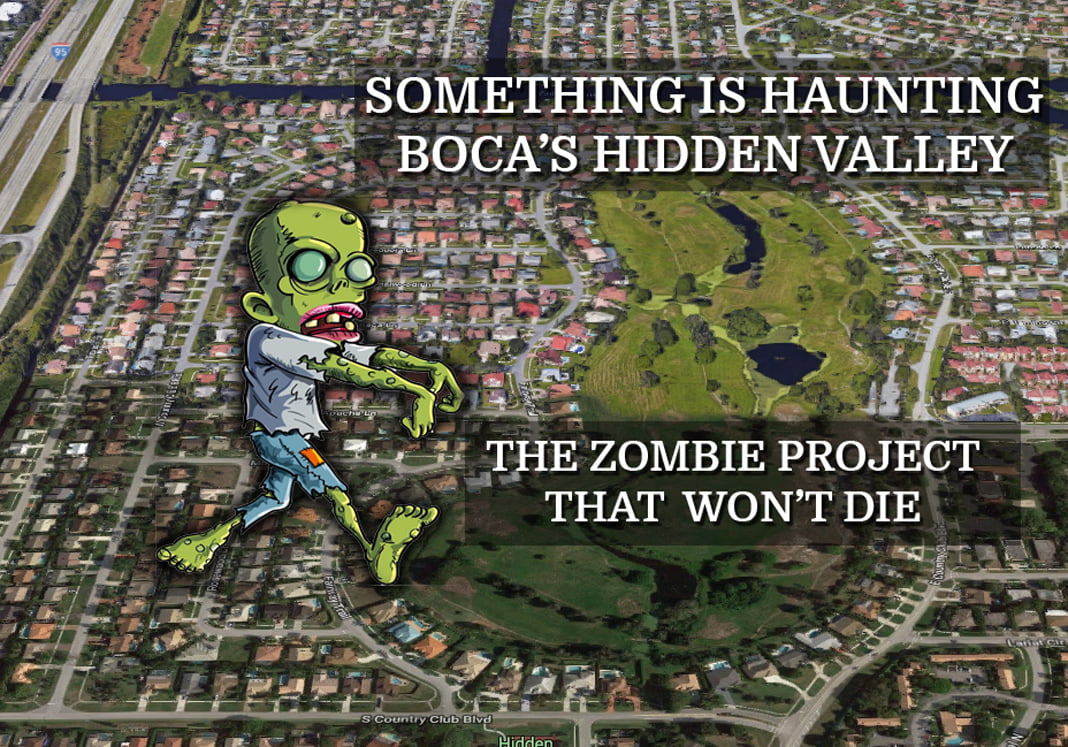 Hidden Valley used to have a golf course. Now it’s abandoned and has returned to nature. But instead of leaving some of Boca Raton’s only green space left, a plan to develop it has resurfaced after being initially rejected: Boca Royale. Local residents are upset at the notion of having the area paved over and filled with more homes.

Once again the travesty known as the Boca Royale project has been resurrected. The City Council Agenda for April 10th was posted today (April 4th), and the first reading of the ordinance that will permit this project to proceed has been placed on the Agenda. As you may recall, this matter was pulled at the last moment in February so that the developer could “communicate” with residents opposed to the project. At the meeting he set up on Feb. 24th his attorney and the developer tried their very hardest to convince us that rezoning the land was the best idea for the residents. The response was clear. One of the participants asked that all people opposed to the project stand, and the entire room with the exception of the family of the developer, his employees and one of the owners of the land (the developer still does not own the land), stood in opposition.

Why are we so opposed to this rezoning? There are a myriad of reasons, starting with the lack of recreational land in the north end of Boca Raton. Recreational land was clearly important to the early administrations and residents in Boca Raton. In 1966 Boca residents voted for a bond issue to buy the beaches (Red Reef, Spanish River and South Beach Park). Can you imagine what the City would be like if they said “NO”. Since that time both City Council and residents have recognized that recreational land, whether owned by the city or privately, is an important part of a great city. Recently we have had a glut of development, both downtown and in other parts of the city. The development in the north end of town on Federal and Congress has been incredible. There are literally thousands of housing units of all sorts that are proposed, planned, under construction or recently completed in that area. But what increase in recreational land has there been? None. (Ocean Breeze was already a golf course. We need to keep what little recreational land we have in this area. The owner can work with the City to make the land a fruitful recreational area for all sides. The balance between development and recreation is essential to making this a great city!

The developer has stated that he “does not build houses”. That clearly means that if the land is rezoned, he will sell it. The development he has proposed will never be built. Something else will take its place if it is rezoned. The developer likes to say that if his project is not built, the rezoning will “die”. But if the land has been rezoned once, can the city say “no” to another developer? Not likely. It will be rezoned again.

And what about his development? There is not enough time or space to list all the flaws in his proposal. Traffic comes to mind first. At rush hour, Second Ave has become a nightmare. This would add traffic. Second is rated an F road. It will get worse. The most frequent comment at the P and Z meeting was “Why not widen Second Ave.?”. Can you imagine what Boca Teeca would be like with an expressway running down the middle? And the intersection at Second and Clint Moore would rival the busiest intersections in town for traffic! How would you like to have your neighborhood changed like that?

The developer has asked for many deviations, exceptions and variations. Some are aesthetic, but there are also exceptions requested from rules about building in flood zones and Cat Five zones. These changes will put peoples lives at risk, and they are only the most notable changes. We are very fortunate that he has no intention of building this development, but what would take its place if the land is rezoned is frightening.

Recently the School District announced that they were looking at boundary changes once again. This development would add students to our schools. This can only reinforce the School District’s argument that they need to rezone our neighborhood. The developer has come to an agreement with the District that he will pay them to ignore the fact that his proposal will further crowd our schools (fact!!). Who will be left to deal with this problem? Will the developer or School District admit they exacerbated the problem and solve it? Again, not likely. Residents will have to bear the burden of solving this issue.

There are many uses that this land could be put to. The owners can put forward their plan for a recreational facility that will make them money, or sell the land to someone who is willing to make the land productive with this zoning. People purchased their homes in this area assuming that it would be recreational and to change that would be unfair. The owners have not even attempted to find uses other than residential. All the proposals so far have involved up to 400 housing units! And the land has sat vacant the whole time.

City staff worked with the developer to come up with a plan that they could approve. His plan failed.

What does our our City Council say?