Home Boca Raton Politics A Recap of the Candidate Debate 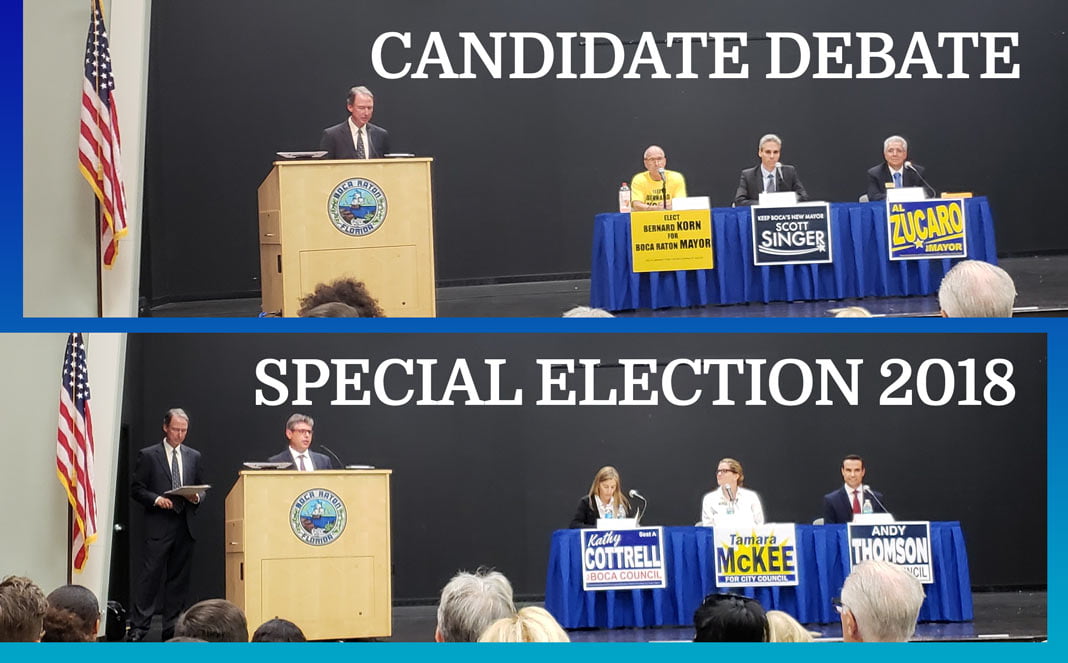 The Special Election of 2018 brought Boca Raton out to the 6500 Congress Building last Thursday Night for a candidate debate. The room was packed, standing room only. While it could have benefited from more disciplined and impartial moderation it turned out to be highly entertaining and informative. It let the audience see the demeanor of the candidates and hear their approaches to dealing with a wide spectrum of issues.

First up were the candidates for Council Seat A. This included Kathy Cottrell, Tamara McKee and Andy Thomson. Candidates were allowed to speak and introduce themselves briefly wherein Cottrell and Thomson reviewed their credentials and endorsements. Instead of positioning herself, McKee instead took the opportunity to get aggressive on her opponents’ claims and positions. She woke the audience up and set the tempo of antagonism maintained through the first half of the event.

Moderator Randy started the questions by asking the key philosophical question asked here months ago: “What does Resident Friendly mean?” Cottrell was allowed to go first and began her definition by saying it means doing what residents want. Schultz was not going to let her off that easy and pressed her harder for a specific example of what she knows residents want. She responded with the same answer BocaWatch contributors agree is the biggest issue facing Boca: dealing with overdevelopment. McKee answered the definition from an experiential basis: saying that being resident friendly is about being a resident and being involved. Thomson focused on the biggest pain points developers will need to overcome to sell more units to potential new residents: fixing the traffic and the overcrowding in schools.

Through the next few questions McKee asked Moderator Randy to repeat some of the questions. It flustered him enough to rebuke her for not listening but at least after that he wasn’t asked to repeat the questions again. From where I was sitting in the audience it seemed as though the moderator was ad-libbing the questions and didn’t have them completely written down ahead of time. A tension developed between the two of them, McKee and the moderator, that manifested in less critical, perhaps even less unfair, treatment of the other two candidates.

The questions didn’t divide the candidates as clearly as they could. For example there were questions about the retiring City Manager, Ocean Breeze and how bloodthirsty each candidate could be toward the menace of iguanas. Everyone said it should be the city’s responsibility to manage them however Cottrell suggested eating them which seemed to me to be at least a little more moral than just killing them. Let’s kill them because we like them, not because we hate them. I never had one but if Kathy’s going to fry one up I’ll get in line.

The Mayoral Candidates included Bernard Korn, Acting Mayor Scott Singer and Al Zucaro, publisher of this fine gadfly “blog” that’s become one of Boca Raton’s most trusted news sources. Zucaro and Singer were quite serious while some felt, especially the moderator, that Korn wasn’t. While McKee focused her outrage on her opponents’ credentials relative to her’s Korn didn’t restrict his outrage towards any particular opponent. It was an indictment of the system as a whole. McKee was pointing to a few apples at a time and then Korn came along and kicked over the entire cart.

Korn made his mark on this election by injecting a degree of “out of place stoicism” that only he could perpetrate so impactfully. He hesitated after each question with a long dramatic pause that made the audience think he was pondering his position methodically. Then he’d respond in a manner that seemed almost completely irrelevant, much to the dismay of the moderator. It was great. The audience loved it as he answered a question about the retirement of the City Manager: by explaining how he’d keep City Hall open 24/7, install a shower and live there. Personally I think that would be kind of cool to hang out with Bernie after the bars close – maybe he’d let his friends crash there too. Why not?

What really made a difference to me is seeing what the rest of the audience was there for: not just to read about the candidates in an article or see them in a a video, but see them in action live, see their demeanor. It was a good event for that. Each candidate’s demeanor spoke to their belonging in one of the three categories:

Cottrell and Zucaro both fell into the category that I myself feel most comfortable in, so that’s why they’re the candidates that resonate the strongest with me. If you believe we’ve done enough building and we need focus on building the infrastructre to keep up with it, these are your people.

Cotrell began the night with a cautious look on her face, her eyes studying the moderator and the crowd with intent. She didn’t allow herself to feign overconfidence or project herself too loudly, instead was in a more absorptive and deliberate mode. Towards the end she was smiling and having fun.

Zucaro does this publishing stuff in a way that’s almost effortless for him but might be impossible for others. So It’s not really fair to call him exclusively analytical when he’s synthesized so much. On Thursday night he had his “Careful Analyst” hat on, like he always puts on when he speaks before Council or in public. He listens. What I liked best were the faces he made when he heard things that were abjectly inaccurate. That response to foolishness, that disgust for people being misled is what fuels him to be there, the same thing that fuels him to publish this site. You won’t get anything but a positive bias from me in characterizing that.

“Throw the Bums Out!” was Bernie Korn’s whole message. He insisted that all politicians are paid puppets, motivated only by support for more and more development. The debate over the truth of his sentiment won’t end with this election. It’s a sentiment that’s too easily believed by voters who don’t doubt the adage “power corrupts”. If you’re the kind of person who votes down the line against incumbents then two candidates will probably resonate best with you: Korn and McKee. If you’re not so sure whether you’re pro-development or anti-development, and think politicians with shorter terms are better than career politicians, then Korn and McKee might be your picks. They seemed to both project a fight against the system, a lack of patience with the decisions and deciders who’ve left us with crowded streets and schools. How much will that resonate with voters? That’s the question that will be answered on the 28th.

Some people point to developer contributions as the common thread between Thomson and Singer. If you didn’t know that you’d still be able to see a similar demeanor between the two of them during the debate. Thomson is not shy when it comes to trying to connect with Boca voters – he shows up at everything almost as much as Weinroth did. His videos on YouTube get far fewer views than they deserve. Singer also makes online videos that project the same stance that he did during the debate: all is well and is being handled appropriately. If they were being funded by the art community and told me “all is well” I’d know more museums and galleries were on the way. If they were being funded by the medical community and said “all is well” I’d know more hospitals and clinics were on the way. However, knowing that they’re funded so disproportionately, compared to other candidates, by the developer community lets me know this for sure: more building is on the way. More high rises, more overcrowding, more traffic.

There was one thing that was brought up during the mayoral debate, by Singer: he said BocaWatch has no competition. While some BocaWatch readers might not see anything wrong with this statement, it struck me as wholly inaccurate. Plus it was immediately insensitive to forget the moderator, Randy, and all the hard work he puts into BocaMag. It forgets about all the other local news sites that also work hard at keeping you informed about Boca Raton.