In late February the new downtown building known as The Mark opened its doors to new tenants. The building has been aptly criticized by many residents, not only for its height and cliff-like walls, but also its prison like appearance on the North and West facing exterior.

As the first of four projects approved by city officials under the Interim Design Guidelines (IDG) that incorporate additional building heights up to one hundred forty feet of usable space The Mark has special significance. Well, it’s supposed to have special significance. Back in 2008 when the CRA approved the IDG, the property that The Mark sits on was part of the RAM project and is still mentioned as the RAM project by many in the development community to this day. Here is an excerpt from the Community Redevelopment Agency (CRA) minutes of November 12, 2008: “RAM project meets the new Interim Design Guidelines and serves as a demonstration for these guidelines”. The key word is demonstration.

Yes, this project is supposed to demonstrate to our city a more appealing and more attractive building approach than our existing development guidelines and eliminate the potential for the dreaded and dastardly “crew-cut” of building heights at one hundred feet. After all, our current guidelines gave such travesties as Mizner Park, 200 East, and the residential rental building at Royal Palm Plaza. Oh, wait-a-minute those projects actually look quite nice. Hey, we could use more of those. Come to think of it, many world class cities have that crew-cut affect. What’s the big deal?

SO, WHAT’S WRONG WITH THE MARK?

A number of citizens have spoken out against the IDG. First and foremost, people don’t like the added height. They also aren’t fans of the lack of horizontal setbacks a few stories up from ground level that characterize our current building code. Walking next to The Mark is like walking next to shear cliffs of concrete. And then there is this: How many of these 140-160 foot buildings are we going to squeeze into our downtown?

The Mark also misses the mark on a human scale. We now have a canyon effect on Plaza Real and to a lesser extent on SE 1st Avenue. All the dwelling units face predominately east and south. Other than the very top floors these units are in close proximity and stare directly at other residential buildings. Charming!

The newness of The Mark will have some appeal and it is well located but the newness will fade. Why take my word for it. I invite the reader to walk the perimeter of the building and judge for themselves. After all, beauty is in the eye of the beholder. 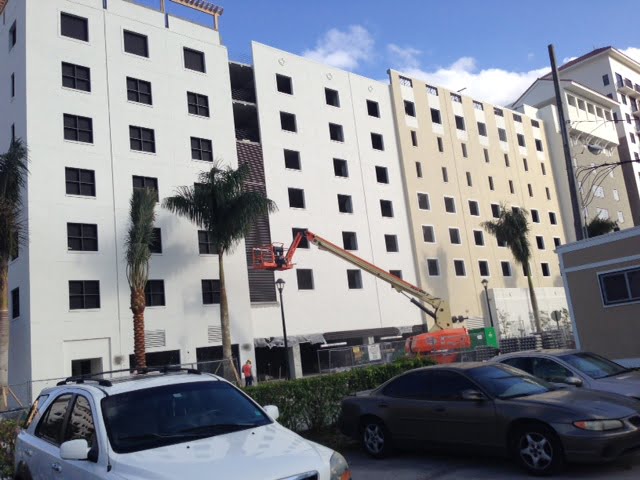 ALL HAIL THE EVALUATION – not

Is there any hope for the citizens, like myself, that are against the IDG? Some seem to think so. I’m not that optimistic. I have seen the city officials and the development community work in sync too many times. Nonetheless, some concerned citizens have successfully lobbied for, and obtained, so I’m told, a promise from the City that an “evaluation” of The Mark will be conducted within a few months time after completion. These same folks are hopeful that The Mark will present itself so poorly that a rollback or sensible modification to IDG will occur.

Here’s why The Mark will pass the evaluation: I predict it will be a combination of City Staff and Urban Design Associates (UDA), the creator of the IDG, that perform the evaluation. I further predict that they will simply have a checklist of the stated requirements of the IDG. The Mark will pass with flying colors because, like it or not, The Mark was built in accordance with the IDG. Even that small square window appearance on the west and north facing walls that manifests the prison-like look is part of the IDG recommendations. Once that evaluation is completed it is pretty much “game, set and match” for any further protests of the IDG. So what’s next?

URBAN DESIGN ASSOCIATES – are they enshrined on Mount Olympus?

First of all, UDA should be eliminated from the process. For several years now, developers have come forward presenting their projects. After the technical descriptive is out of the way, the clinching line is spoken: “and Urban Design Associates has looked at the project and stated that it meets IDG guidelines and they approve the project” and a collective sigh of reverence comes forth from the elected body.

Second, the evaluation process should not consist of determining whether or not The Mark project checks every box of the IDG. Instead, the evaluation should be made on the Interim Design Guidelines itself. The Mark is simply a demonstration of what these guidelines will yield. Is this the type of building approach that we would like dominating our skyline in the future? That’s the question.

No persons and no organizations are infallible. UDA, in spite of whatever credentials they may have and in spite of whatever money has been given them, has given us an outcome that is questionable for our city. Citizens need to speak out, loudly and in vast numbers to the CRA/City Council and demand that the IDG and companion Pattern Book be abandoned immediately. It’s time to turn the page and work toward a better plan for our downtown.