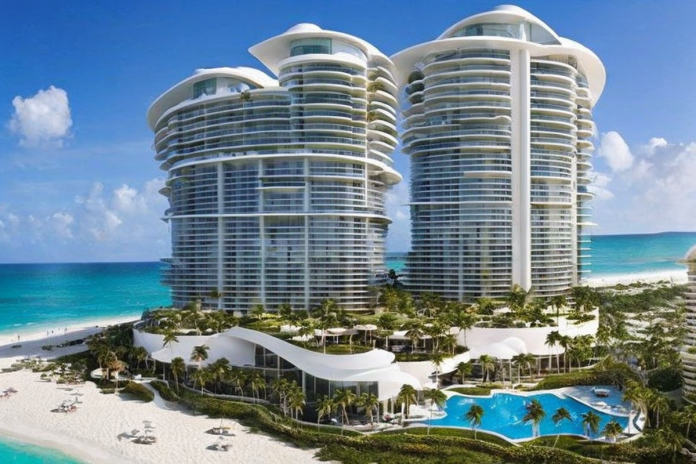 The future is coming to Boca Raton. New designs will be emerging. Old, classic, world-class architecture we’ve loved and called home will inspire new ideas, make new forms cohere together into homes for the future residents of Boca. Previously we took a look at some artificial intelligence visions into what could be designed and built in Boca Raton in the next ten years. Now we’re going forward again, into 2050 or 2060, looking at what will be built on the same old beach we’ve loved.

Nelson, a 42 year old man living in a luxurious condo near the beach in Boca Raton, was getting ready for his work meeting 15 miles away. It was 2063, and the world had changed drastically over the past few decades.

Nelson‘s apartment was equipped with all sorts of futuristic technology that made preparing for his meeting much easier than ever before. He started off by using an AI-enabled voice assistant to order an autonomous car from one of the nearby rental companies. The car arrived within minutes and Nelson hopped in and spoke his destination into the dashboard computer. The car took off with no input from him as it drove itself across town to his destination while he relaxed on board.

When he arrived at the arcology near the swamp, Nelson stepped out of his self-driving car into a world full of sophisticated technological marvels that were designed specifically for this location’s environment – solar powered robots skittering around monitoring wildlife, drones buzzing overhead collecting data on air quality and pollution levels, intelligent surveillance systems tracking people’s movements throughout its corridors…and so much more!

To make sure he looked presentable at this important meeting, Nelson used a state-of-the art 3D body scanner to get measured up precisely. The device then projected a hologram of the perfect clothes for his body type, which he could change and customize to his own liking. He also used an AI-powered makeup printer to apply cosmetics directly onto his face with perfect precision. By the time he was finished getting himself ready he had arrived at the location where the car had to drop him off: at a structure located at the intersection of Glades and Palmetto: the Glades Arcology, a 17M square foot facility that contained residences, shops, workplaces and even some manufacturing and shipping sections.

Once Nelson was all dressed up and ready to go, he used a hoverboard to quickly travel through the arcology’s corridors – no waiting in traffic or having to worry about parking! As he arrived at the meeting room, Nelson felt confident that he had made it on time and looking stylish due to all of the future products available at his disposal.

Condos with Openings in their Centers

Those were some really wild designs, right? Don’t worry. That’s not the end of them. There’s still some more and they get even wilder. Some are too wild. We’ll take a look at those next.

If you think these are too wild then you might want to see some condo designs predicted for the near future. If you like these  then take a look at some more futuristic condo designs, even some that really shouldn’t be built in Boca.