“Sleeper cell(s)” on the City Council/CRA and Advisory Boards….

A few weeks ago in an article published in the Sun Sentinel, Attorney Charlie Siemon was quoted as saying much progress was being made with City Staff to advance efforts for an anticipated modified submittal of the New Mizner on the Green Project (NMOG).  This reported comment led me to submit a public records request to try to determine what was happening at the staff and council levels.  The findings are remarkable…..

Perhaps a good beginning point would be to recognize the seemingly endless access that this project and its representatives have been afforded to City Council members and top level Staff.  Without taking an abacus to the findings, suffice it to say that dozens of meetings at both City Hall and other locations have taken place amounting to hundreds of hours of elected officials’ and staff’ time….Incredible…..

Another interesting finding can be seen in the many email communications between Attorney Siemon and members of the Council and staff.  Items covered over the course of the last year range from the project’s strategy for moving forward and staff’s responses assisting with comments as to how the project would make its way through an approval process to a final hearing in front of the Community Development Agency (CRA), the elected body.

The timeline of these communications begins mid-2014 through the end of the year.  The information contained is quite useful in anticipating how the NMOG project will proceed in 2015 when it again moves forward with their effort to get this project to a CRA/City Council vote.

In his September 10, 2014 memo to City Manager Lief Ahnell, Deputy City Manager George Brown outlines what actions would be required to move this project forward.  He states that an amendment to the Downtown Development Order would “require an Ordinance by the City Council (after recommendation from the Planning and Zoning Board and the CRA).  City Code provides that the City Council, a member of the City Council, the Planning and Zoning Board, the City Manager, or the City Attorney may initiate a proposal to amend any provision of the Land Development Regulations of the City.”  Suffice it to say that Mr. Brown does an excellent job in providing the precise roadmap for the developer interest to traverse …sort of a follow the yellow brick road process that would effectively lead to approval…..hmmmm!

So where is the evidence suggesting “sleeper(s)”….

Perhaps the most interesting item contained in the public records response is an August 21 email from Councilman/CRA member Robert Weinroth to Attorney Charlie Siemon in which Council Weinroth is quoted as saying “…the push back from the usual suspects was not unexpected….”  The exact reference signals a bias towards the voices of people (your voices) who are opposed to and concern by the unbridled development being experienced in Boca Raton.  Council Weinroth goes on to say that “…Currently I sense very little support for this (NMOG)…..” “ ….The PR initiative may only further incite the nay sayers w/o creating strong showing of support.”  And finally, he states that he will approach the matter “…with an open mind…” recognizing that the final submittal will “….likely be scaled back….”  However, in a final thought, he states to Attorney Siemon that “….this could be the “red meat” necessary to “…wake up the anti-development sentiments of the past….”

One can only wonder how ‘open’ he is with the biases revealed within this telling memo….not often is there such clear evidence of bias…. but you, the voices he is referencing, can make that judgment for yourselves….

Another item for review regarding Councilman Weinroth’s pro-development propensities would be an examination of his campaign finance report.  These identify thousands of dollars contributed by the development community and representatives of their interests…..

Is it no wonder that the cost of ‘ribbons’ has gone up considerably during the last year of campaigning by Councilman Weinroth as he presented himself to be an elected representative of the citizens of Boca Raton….while characterizing you, the voting citizen as the usual suspects, the nay sayers, and the anti-development sentiments…..Incredible!!!

Other empirical evidence is available demonstrating embedded biases of other elected and appointed officials….These, however, will be identified at another time in another editorial….Stay tuned….

Communtication to and from City is Public Record.  Attached- Email from City Council Member to Land Use Attorney for the New Mizner on the Green… 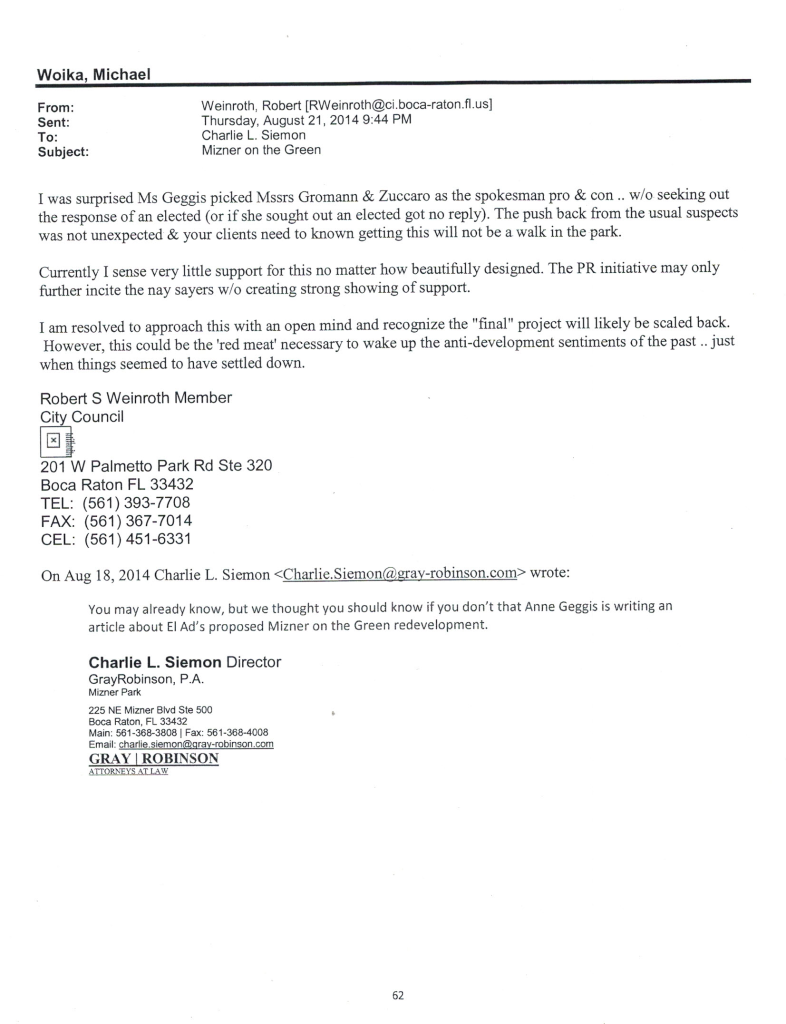