Boca Raton citizens have signaled a mandate, through their overwhelming support of the November 8th ballot question, that they want their Intracoastal Waterway lands to be preserved for recreation. This article examines the details of the election results, their implications and required actions.

On November 17th the Palm Beach County Supervisor of Elections posted the detailed results of the November 8th election on their website: http://www.pbcelections.org/. BocaWatch has summarized the results:

The following map shows the percentage of YES votes per precinct: 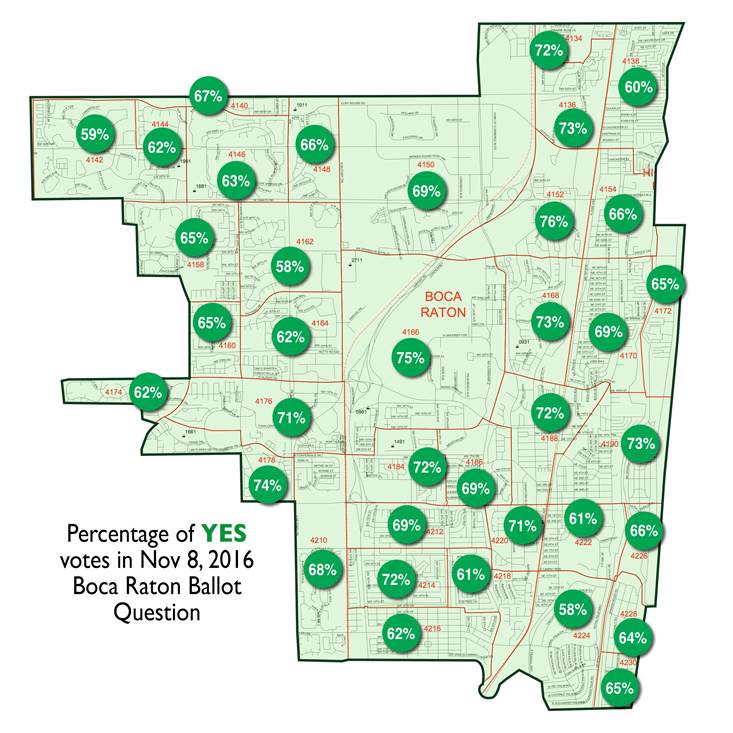 The implications of these results are significant:

The city-owned Wildflower property has sat idle for the last seven years. Every precinct in the City voted YES on the Boca Raton ballot question to preserve City-owned Intracoastal Waterway lands for recreation. Residents will hold the City Council accountable to move quickly on this mandate. First, the property must be opened as a passive park. Second, recreation-oriented comp plan and zoning changes made for the site. Third, timely implementation of changes recommended in the City’s comprehensive waterfront study. The Wildflower passive park opening plan should be presented to the citizens at the December 13 City Council meeting.