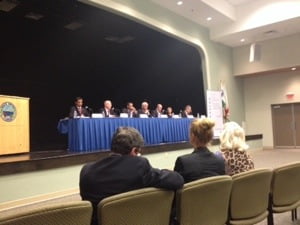 Tonight there was a meeting at the City Annex on Congress. City Council candidates spoke in front of a crowd that was close to a hundred audience members. Small business growth was a topic that was posed towards the candidates. Each candidate spoke for several minutes about what they would do to stimulate growth.

Some spoke of deregulation. Many spoke of the need to entice CEO’s to bring their businesses here.

There was much discussion concerning the features that position Boca Raton uniquely towards attracting business, such as green space, infrastructure, schools, and people. It was interesting that none of the candidates spoke specifically about developing a marketing campaign to showcase those strengths. Maybe that was taken for granted as part of the “attract business” promise, but when you’re trying to reach out to businesses, heavy investment in a smart marketing campaign seems like the most tangible strategy to get results. Cut and dry.

The challenges that face the City managing growth were discussed. Plans for how each candidate will approach change were discussed, keeping the character the same as we’ve come to know and love. Even the specter of communism and it’s threat to Boca Raton’s growth were enough to draw concerns from at least one candidate.

Fire Department and Police Department pensions were a topic introduced to the candidates. Responses ranged from “I know unions” to “there’s no limit to how much can be done to keep us safe.”
The most tangible tactic for addressing the issue was to use actuaries to help negotiate fair pension sustainability for City employees.

There was no shortage is sophomoric pandering. It had the usual range of responses, but those candidates who kept the audience in mind stood out. Boca Residents aren’t so easy to pander to, and the difference in response to the competing candidates contrasted enough to allow calling some early winners.

Annexation of western communities was another topic discussed. As was the case with most of the other topics, Mr. Weinroth’s responses and solutions were both easier on the ears, least filled with pandering, and most reasonable. He’s running for Seat D.

Four candidates are running for Seat B. Among the most clear and confident responses came from Mr. Ehrnst. He looks like that actor from Oz, and that’s kind of cool.

The charter school question was posed. Mr. Ehrnst gave the best response when he mentioned his son who was in the audience, a Boca High Bobcat. Go Bobcats! He was pretty realistic about the current demand for them. He seemed a lot more informed about the topic than other candidates, specifically about the current feeling towards them in town.

After about an hour and fifteen minutes the differences in demeanor between the candidates began to diverge. Some were able to sit calmly, enjoying the opportunity. Others began to fidget and make uncomfortable faces. Body language revealed who is comfortable in the type of environment being involved with government entails. I want my council people to be cool and focused. Thankfully we’ve got some cool ones that seem like easy front runners.