As if we do not have enough back room dealings to worry about on a local level, in this legislative session, Tallahassee attempted to ‘gut’ Florida’s Sunshine Law.  Open and transparent government is a hallmark of good governance.  Some elected officials do not believe that; some elected officials would like nothing better than to do the people’s business behind closed doors.  Well it almost happened this legislative session.  A bill allowing private meeting of members of the same political body, Boca Raton’s City Council for example, allowing members of the same body to talk in private almost passed.  Eight state representatives from Broward and Palm Beach counties including our own representative, Bill Hager, R-Boca Raton voted for the bill.  Had this bill passed, it would have ‘gutted’ the Sunshine Law says Barbara Petersen, President of the First Amendment Foundation.  If you think it difficult to follow the antics of our local officials now, this bill would have made it impossible.  Be careful….BocaWatch will follow this issue in the next legislative session.  You are encouraged to make sure that our local elected officials do not support this kind of bad governance.  We have enough bad governance as it is!  Al Zucaro 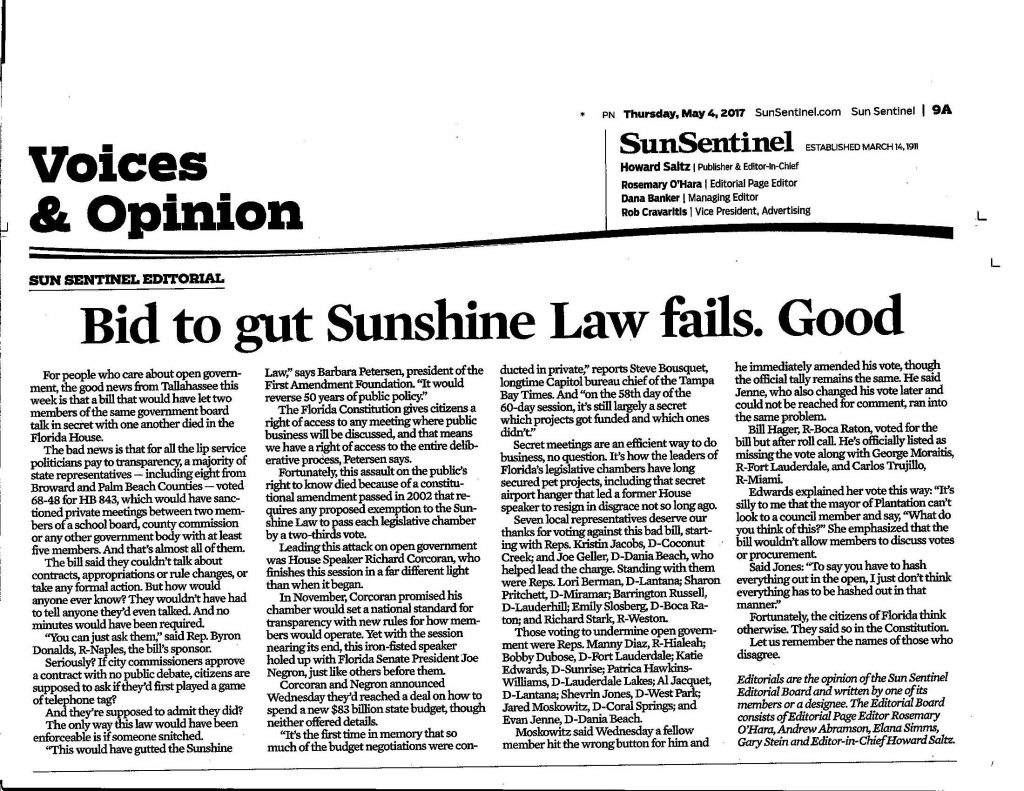 Attack on FL Sunshine Law by Bill Hager.  Note that former Boca Raton City Council member Bill Hager, now our State Rep. voted for the law! (HB 843).  Please call him out for this.  Per Barbara Petersen, president of the First Amendment Foundation: “This would have gutted the Sunshine Law”.  See last column on right:  Bill Hager R-Boca Raton, voted for the bill, but after roll call. He’s officially listed as missing the vote….Sneaky way to keep his name from showing as supporting HB 843, which would have sanctioned private meetings between two members of any government body with more than five members.   I bet a few of the current Boca City Council members lobbied him to vote for this bill.  Vivian Lesher