The Boca Raton City Council has been asked several times for status on their investigation into the misrepresentation by the City Staff of their 2011 Wildflower Citizen Site Usage Survey.  No relevant feedback has been received so far. It is now over three months since the City Council was alerted to the problem with a recommendation for due diligence into the fraud. A recent follow-up email requesting feedback triggered a response from Deputy Mayor Robert Weinroth that not only does not address the request, but is quite bizarre.

September 10, 2015 (Exhibit 1) – citizens sent an email to each City Council member alerting them to problems with the City Staff’s scoring of their 2011 Wildflower Citizen Site Usage Survey. The problems are described in the article in the following link: https://bocawatch.org/lies-damned-lies-and-statistics/. The email also recommended that the City Council members perform due diligence on the survey results.

September 10, 2015 (Exhibit 2) – Mr. Weinroth requests survey data and calculation of survey confidence intervals. He seems to not realize that the survey data was collected by the City Staff, not citizens.

September 11, 2015 (Exhibit 3) – the City Staff’s survey data as well as confidence intervals to the 95% confidence level were provided to Mr. Wienroth. The survey results are statistically significant.

October 27, 2015 – When no feedback on the requested due diligence on the problem was received from any City Council member, a detailed presentation containing due diligence facts was made to the City Council on this date and is in the record

November 29, 2015 (Exhibit 4) – when no City Council response was provided to the information presented, a follow-up email was sent to each City Council member requesting feedback.

November 30, 2015 (Exhibit 5) – Mr. Weinroth responded to the email request for feedback. This response is the subject of this article.

The City Council’s silence and Mr. Weinroth’s ridiculous email response regarding the City Staff’s fraud in scoring the City’s 2011 Wildflower Citizen Site Usage Survey leads to a disturbing conclusion. If the City Council was unaware that the City Staff was committing fraud, they should be as outraged as the citizens when the fraud was exposed because they were lied to also and this has led to four years of wasted time and effort on the Wildflower project. This also translates to money that was wasted during this period.

Instead of outrage, however, the City Council has been silent for three months after the fraud was exposed. Furthermore, Mr. Wienroth’s position as articulated in his email is to ignore the fraud and try to change the argument away from the City’s 2011 Wildflower Citizen Site Usage Survey. According to author John T. Reed a West Point graduate and Harvard MBA, this is referred to as an Intellectually Dishonest Debate Tactic!

The alternative is that if the City Council , as a whole, or any past or present members of the council were aware of staff’s fraud, that there would be a reasonable inference of conspiracy to defraud the citizens; a result, if true,  is more than simply being an inconvenient truth.   The City Council’s silence on this matter strongly suggests that the City Council may have some culpability, certainly deserving an explanation.

Please help get the City Council to respond to this issue. Send an email to the Mayor and Council members requesting the due diligence response and that the Wildflower site be developed as a public park as requested by the citizens in the City’s survey.

It’s easy with the following link.

Use the pull-down menu in the form to select Mayor/City Council, fill in the requested info, your comments and Submit. http://myboca.us/cityforms/contactUsMain.aspx

Please consider the strong citizen sentiment in favor of making the Wildflower property a park. In 2011 the City conducted a citizen survey regarding preferred usage of the property. Unfortunately, the survey results were scored inappropriately by the City Staff. See the first three lines in Page 1 of the attachment for three evaluations of the same survey responses. Page 2 of the attachment includes the Staff’s evaluation criteria. The problem is rather obvious, e.g., a “park with a hot dog stand” citizen response would be scored by the Staff as favoring a restaurant; whereas the spirit of the response favors a park.

Note that Dr. Lenz is a Professor and Director of Undergraduate Programs, Advising, and Internships in FAU’s Political Science Department.

It is best to use the results of a survey rather than anecdotal data to guide decisions. Unfortunately, the results of the Staff’s evaluation of this citizen survey were presented to the City Council as “overwhelmingly” favoring a restaurant. This is not true. Before a long-term agreement with a restaurant chain is completed, the City Council members need to perform due diligence on the survey results. The survey responses can be obtained from the Staff or I can email them to you in a file.

Please forward the data used in your conclusion including how your sample was selected as a reflection of the population of our city? Also interested in your statistical confidence interval to validate the results. Thank you. ~ rsw

Attached is the data file I used in my conclusion. I received this from the City Clerk’s office and zipped it from 8MB to 5MB for faster transmission. The file inside of the zipped folder is in .pst format since the file contains citizen emails responding to the City’s request for preferred uses of the Wildflower property. Save the .pst file on your computer, e.g., Desktop. This type of file should be opened with MS Outlook so just start Outlook and go to the File menu and locate the .pst file and open it.

Regarding how my sample was selected, I used the same information that the City Staff used to evaluate citizen responses. In June, 2011 the City added a survey to their web site requesting citizen input on preferred uses of the Wildflower property. Citizen input was gathered until the end of October, 2011. There were 151 emails received by the City in response to the survey. The first three lines of the spreadsheet in the attachment I sent you last night show the results of three evaluations of the same information. About half of the 151 email responses were not relevant to the survey question asked by the City.

I can also calculate the intervals of the other lines if that would help.

Your feedback on due diligence of the City’s 2011 Citizen Wildflower site survey would be appreciated. An email was sent to each city council member on 9/10/2015 (over two months ago) highlighting irregularities in the survey. On 10/27/2015 a presentation providing details on the problems with the city’s scoring of the survey responses was made to the city council. The scoring misrepresented the intent of the citizens and was used to justify pursuing a restaurant instead of a park on the Wildflower site for the last six years. We have not received any feedback relating to the misrepresentation of the survey’s results.

Also, your feedback on current plans for the Wildflower site would be helpful. The attached spreadsheet showing the various citizen surveys has been updated with the results of a recent Boca Raton Tribune survey regarding preferences for usage of the site.

Following is the spreadsheet attached to the email. 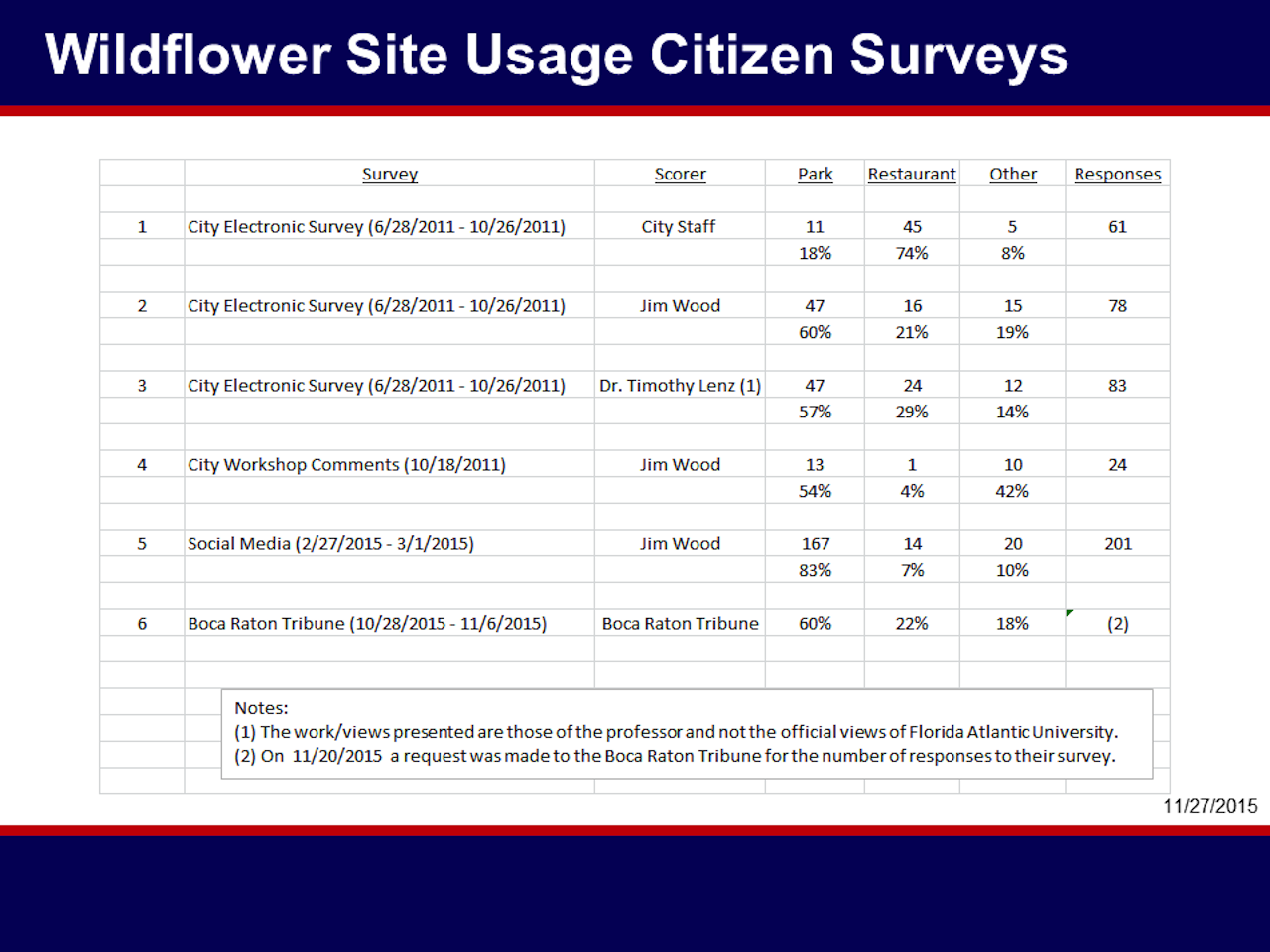 The surveys you have referenced were not undertaken with any attention to the requirements for ensuring a truly representative sampling of the 90,000 residents in the City of Boca Raton. Likewise, a survey is not a referendum. For every person speaking against the proposed development of the old Wildflower property I have spoken to many more who have voiced support for the direction of the city, the actions taken by the City Council and the existing parks & recreational facilities available to our residents.

You cannot make soufflés out of cow patties and the original “survey” undertaken several years ago does not appear to have been any more credible or representative of the entire city than more recent attempts. How it was interpreted is less a factor than how it was administered. At the end of the day, a true survey (similar to the statistically relevant surveys used by candidates for public office to understand the sentiments of the electorate and administered by a third party) will likely cost between $8,000 – $10,000.

Surveys, from what I can tell, had little if any bearing on the ultimate decision made by the Council when the RFP was authorized. More relevant to the decision were workshops and Council debates rather than blindly following the purported results of a survey.

If you are interested in putting a true survey in the field please let me know and I will provide you with the names of several organizations who would be pleased to undertake the assignment. ~ rsw