With the recent focus on school overcrowding and development, the city council and school board have reacted in numerous ways.  School board member Frank Barbieri and City Council member Scott Singer have taken the lead in this matter.  Solutions have been sought and stories written….One such story raising questions to the generally accepted narrative has been forward by resident and mayoral candidate Glenn Gromann.  BocaWatch thought it useful to air Mr. Gromann’s comments and invites Mr. Singer and Mr. Barbieri to respond.

For those of you interested here is an accurate depiction of potential school property (not including some City owned parcels just to the North of Don Estridge School). Anyone can go to the Property Appraisers website http://www.pbcgov.com/papa/index.htm and see these maps for parcel #06424712130030000 (Clearly marked “COUNTESS DE HOERNLE PARK” .

At least 3 news outlets have depicted a MISREPRESENTATIVE AND INCORRECT OUTLINE MAP of potential school parcels presumably supplied by Council member Scott Singer. This info has been reposted numerous times on social media.

With the exception of 2 of the northern parcels (accurately depicted on the Singer map) there are no standalone rectangular parcels of land owned by the City. The parcels identified by Mr. Singer are contained within the ONE UNIFIED PARCEL THAT COMPRISES THE DE HOERNLE PARK as depicted on the print from the property appraisers office enclosed herein. These “parcels” are currently zoned recreational and WOULD HAVE TO BE SEPARATED FROM THE DEHORNLE PARK PARCEL IN ORDER TO BE USED FOR PUBLIC SCHOOLS, THE NET RESULT WOULD EFFECTUATE A REDUCTION IN THE GROSS ACREAGE OF DEHORNLE PARK. The park property was purchased with City bond money which requires use for a public purpose and the use for schools would presumably fit that purpose.

While I support the effort to use City land for schools using clearly misrepresentative and false maps and drawings does not aid in the process and subjects the same to attack by those not in favor. It is also irresponsible for the press to publish these clearly inaccurate map outlines. Clearly park land will need to be extracted from DeHoernle Park to create the land necessary to build schools.

As a side note I bring your attention to the current condition at Don Estridge, it escapes me that such a school has not one but two baseball fields, a track and yes tennis courts? I have never seen the baseball fields used during the daytime by students—perhaps they are all playing tennis? Or running track—I have never seen anyone ever use that and I drive by the school 2-3 times per day.

Likewise the need for 15 acres to build a middle school seems a little overboard when you could build a 250,000 sq. ft. office building on such a plot and put 2,000 people in it. Notwithstanding the same one could easily build a middle school AND a high school with shared use of park facilities during school hours when there is practically no one at the park.

With Lynn Univeristy, Pope John Paul HS and Don Estridge and the City Library all nearby the area makes for a great educational hub!

While we are discussing City owned land please note the attached exhibit showing City owned property just South of Don Estridge on the border of De Hoernle Park directly accessible from Banyan. I call this the “fire department junkyard” it’s a property easily worth $10MM which is used to store old fire equipment, conduct training, etc. It’s filled with junk such as cut up underground storage tanks, etc.  HERE IS YOUR NEW HIGH SCHOOL SITE!

It is comical to me that the prior suggestions of the use of City property in this area by Mr. Singer is somehow evident of “brilliant governance”. In fact it is reactionary and so common sense a 5th grader could come up with it. Boca is NEVER proactive only reactive. Now you have my suggestion (with a correct map!) to add a High School as well. Taking me 3 minutes to suggest it. Of course we must also deal with “If it’s not my idea it’s not a good idea” concept of government so let’s see where this goes. 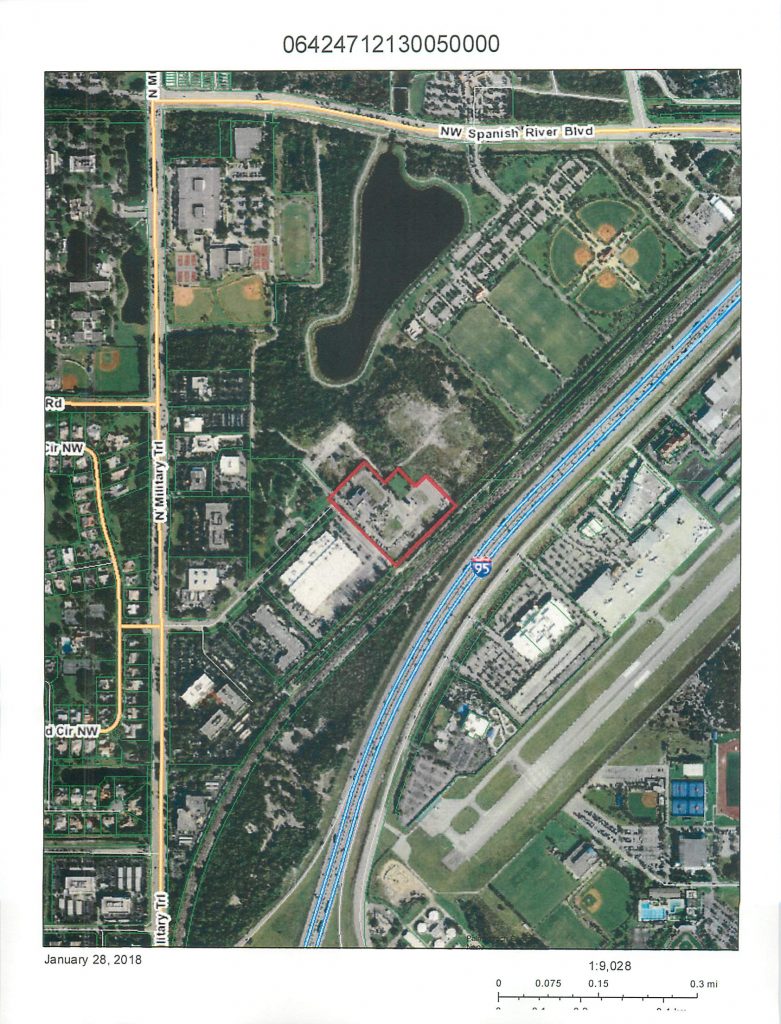 If it wanted to the PB School district could thus 100% solve their “overcapacity” issues with building multiple schools capable of using park fields and an interconnected road network integrated and shared parking in a safe area well away from residential in an education hub. The private sector could do this and build out the schools in 18 months.

No fiscal impact to city because these properties are not paying any taxes as it is.

Here are just two of the many stories using the misleading maps please compare to the actual map attached.

Further as Ms. O’Rourke indicated (excellent idea) Banyan Trail should be cross-connected to both the park and the School(s) as a back way in to disperse traffic in the area.