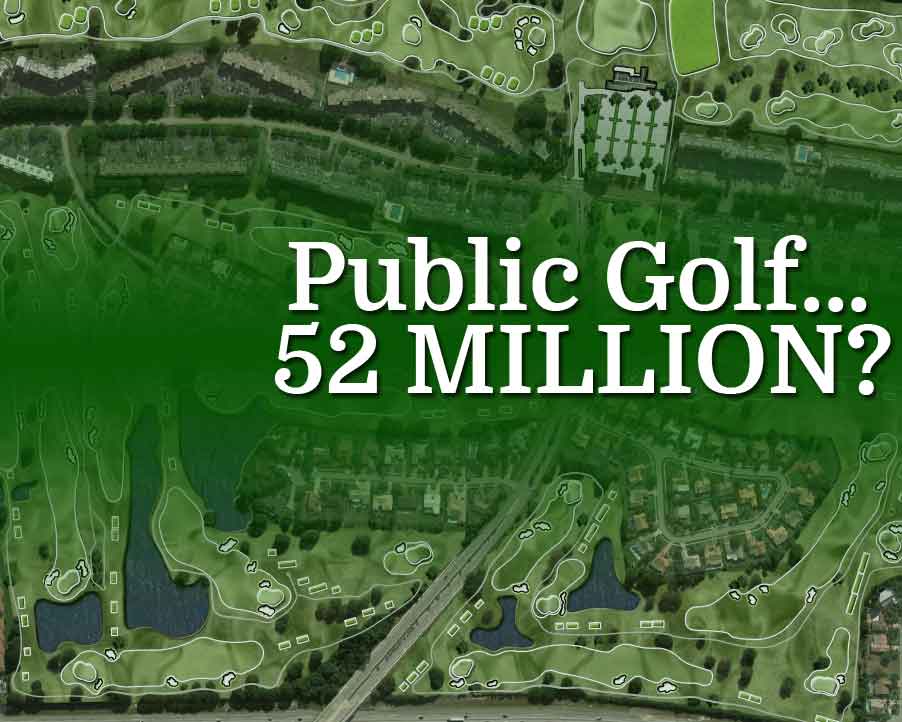 $52 million for a new golf course? At the February 25th meeting of the Greater Boca Raton Beach & Park District the commissioners reviewed a lengthy document provided by their architect which included a $28 million construction cost estimate for their new golf course project.  Combined with the $24 million purchase price, this results in the $52 million total cost.

This cost was significantly higher than the $10.5 million previously discussed for construction of the golf course only.  While there was no public discussion reconciling the increased cost, documents provided to the commissioners provided these details which were subsequently provided to city staff in preparation for another joint meeting on the project.

The architect was asked to compare this cost estimate to the larger 27 hole championship course at osprey point in western Boca Raton that was constructed for $14.5 million by Palm Beach county several years ago.  This cost is also significantly higher than the $14.8 million estimate provided by the National Golf Foundation in their feasibilty study.

The architect could not directly compare their cost estimates to osprey point, but they did indicate there were 2 contractors who were used for these estimates and they feel confident with these numbers.  At the Feb. 25th meeting the architect stated the $28 million cost estimate was for a basic golf course.  Could this lead to significatly higher costs if the “world class” golf course previously envisioned is constructed via “change orders” that have been the historical norm on District projects?  The District has experienced over $1 million cost overruns on their most recent construction projects at the Swim & Racquet Club and Sugar Sand park playground projects.

While the prior interim executive director, Arthur Koski, originally indicated that no tax increases would be required for this project, the District’s financial advisor has not provided any public comments on this issue.  The current interim executive director, Brianne Harms, has indicated that she is now working with their financial advisor on this issue.  Borrowing another $28 million would be expected to put considerable strain on the District’s budget and there could be an increase in taxes to pay for this project, as indicated publicly by at least 1 commissioner.

After 6 months since the August joint meeting of the city council & commissioners of the Greater Boca Raton Beach & Park District, the District submitted the requested details on the financial estimates for building the new golf course, Boca National Golf Club, formerly named Ocean Breeze & Boca Teeca Country Club.  The District had requested financing assistance from the city, but city officials requested the details prior to making any committment on their assistance with financing the project.

Historically the city has acted as a pass through conduit for financing District projects, including the $24 million purchase  of the golf course property in 2018.  Previously the city has borrowed funds in the public financing markets & then loaned these funds to the District with a repayment schedule similar to the city’s borrowing terms.  The District covers a larger geographic area than the city & they have the ability to increase their tax milage rate to meet their budgetary requirements.

The current plans include a tunnel under NW 2nd Ave. and lights on the eastern portion of the property.  Neither of these items, nor the approved design of the golf course has been widely circulated to the residents for their comments.  At the last meeting of the District there was a public suggestion for at least a sign to be placed on the property with information on the project.  Maybe the District could provide a previously promised web site address on this sign with project details?

All residents are looking forward to the completion of the project, especially since there will be approximately 1 year between the closing of the current golf course on August 31, 2019 & the projected opening of the new golf course in Sept/Oct 2020.

Meetings of the District are normally held the 1st & 3rd Monday each month at 5:15pm at Sugar Sand Park.  Public is invited to all meetings which are also recorded and available for replay via a link on the District’s web site.  A forthcoming joint meeting of the District commissioners & city council is expected to be scheduled within the next month.