Programming is a doorway to understanding. It’s not just about learning how to make a computer program; it’s allows the practice of logical and organizational thinking. Even if a learner doesn’t become a computer programmer, there are many other lessons to take away.

One of the benefits of growing up in Boca Raton during the dawn of personal computers was getting to be around the folks who pioneered it all. Many of us were fortunate enough to learn programming alongside these folks. The tools we had to learn programming are still around, but not as readily accessible as they used to be a few years ago. 64 bit operating systems have pretty much shut the door on older command-line tools like GWBASIC, the programming system that kids were learning on back in the eighties and nineties.

This “Kid’s Corner” link is awesome too: http://msdn.microsoft.com/en-us/beginner/bb308754.aspx

As a side note:
During a tour of one of Boca’s public elementary school, I had asked to be taken to the computer lab, excited to discover how they were teaching elementary level computers. It was thrilling to see an enormous room filled with around sixty identical desktop computers. Because it was an open-house event, the faculty member who ran the room was there. I asked her how awesome it is to have such a great room to teach programming in. She reluctantly explained how the room isn’t used for computer instruction any more. She said how they stopped having computer classes, AND NOW THE ROOM IS USED INSTEAD FOR TEST PREP. I honestly didn’t know how to react, but it felt like being punched in the stomach. I left the room speechless. 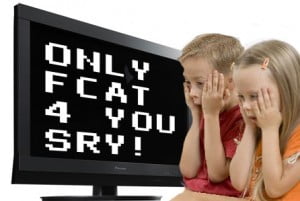 So basically, FCATs have trumped programming. I haven’t checked back to find out if computer classes have resumed. Maybe someone could clue me in on which schools still have computer science classes and which don’t. Comments are open.

My point in mentioning my experience is this:
If you want your kids to learn about programming, you’d better prioritize it at home. Just because your school has a computer lab, don’t assume they’re being taught computer science.
Give them this one little tool, Smart Basic. See what they do with it. They might create a masterpiece; they might ignore it altogether. At least give them a shot.