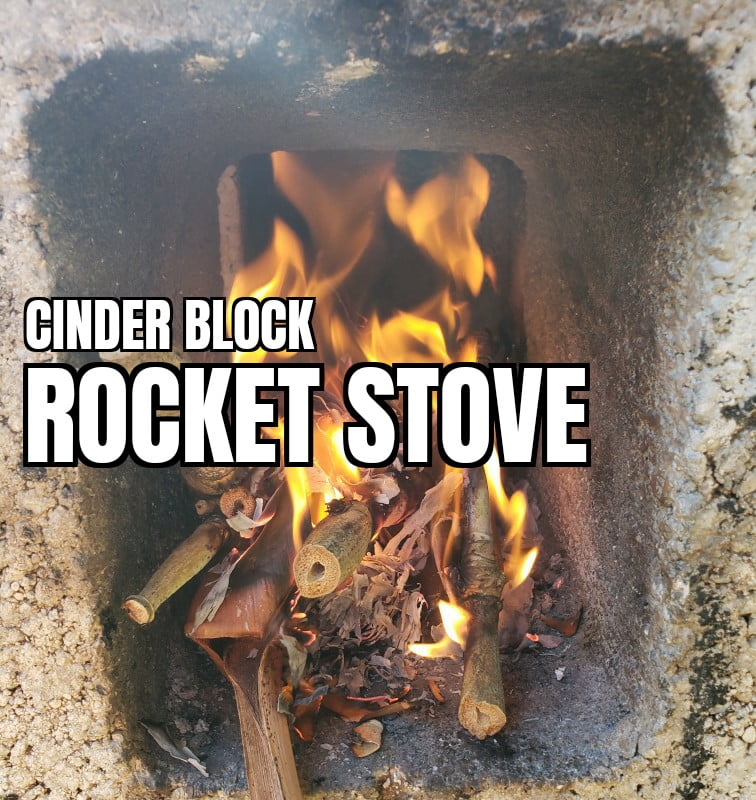 Rocket stoves allow powerful, focused fire to be created using only a small amount of fuel. Using twigs, bark, leaves, cardboard or small sticks, a fire can be sustained that’s strong enough to boil a large pot of water. Many low tech designs for rocket stoves exist, but probably the simplest and cheapest involves common cinder blocks. In the aftermath of a natural disaster, like a hurricane, rocket stoves give their users peace-of-mind that their cooking doesn’t have to be limited to how much propane they have.

Floridians prepare during the approach of hurricanes by getting in line to get propane bottles filled. When there’s no electricity, using propane is a common way to keep vital cooking fires burning. Propane lines can be very long and typically limit customers to getting a couple bottles filled. A bottle of propane doesn’t last long when it’s being used to cook 3 meals a day, even shorter when it’s also being used for the second priority: hot water for cleaning. Having a rocket stove lessens the necessity of propane and allows almost anything to become fuel.

After playing around with a backyard fire pit, during a recent cold weekend morning, I thought about cooking some food on it. In spite of having a grate and a lot of hot coals, it didn’t seem like a practical way to boil water or fry eggs. Making a hot enough fire would have necessitated making the fire bigger, using a lot of wood, and really wasting most of the wood and heat. If we had to cook over a fire, for example after a hurricane when there’s no propane left, we’d be going through a lot of wood quickly. After a day or two of cooking we’d be running out of wood.

I had been watching YouTube videos about people camping and saw how some people had these little stoves that let them camp in tents even when it’s snowing. These tiny little stoves were often referred to as “rocket stoves”. Then YouTube showed me a video about someone making a rocket stove out of cinder blocks. I’ve always loved the concept of cinder blocks, so it intrigued me.

The design I saw in the video, the design I tried, involves using only four cinder blocks. Three are standard “two hole” cinder blocks while one is a weird H shape. I only had the regular two-hole kind at home, so I put the H shaped block on my Home Depot list.

When I got to the store there wasn’t any other kind of cinder block besides standard two-hole blocks and half-sized, one-hole cubic blocks. I bought a couple of each. They average around $1.50 a piece, so they’re really cheap.

Because I was unable to find an H shaped block I decided to do the next best thing: make one. I got a masonry blade for my circular saw and cut off the ends of a couple blocks in different ways. Some I cut off so the U shaped empty area was long. Some I cut short, half way across the open hole. I wanted to try out different configurations to see which worked best. 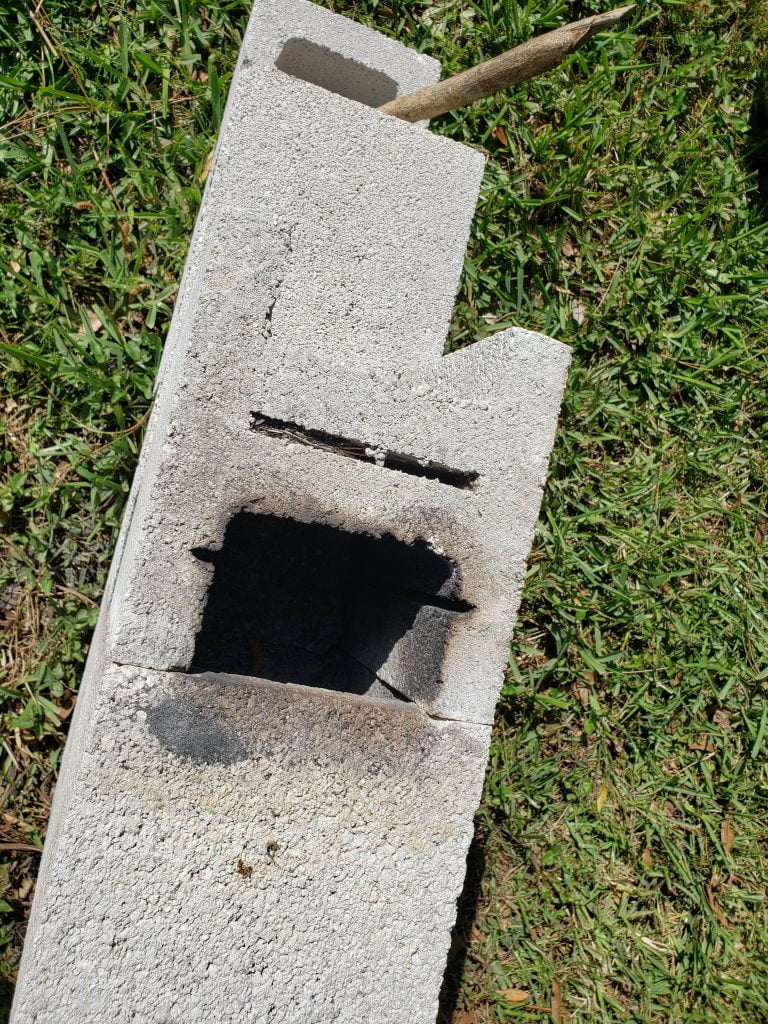 I watched one video where a Mennonite looking girl used an H block that had a shallow U shape on the end. I watched another video where a guy had cut the outside edge of the block leaving the U shape as long as he could. The U shaped area is part of the area where the fire is, the combustion chamber. Intuitively I thought that the bigger this area was, the better the heat would be. However, the latter guy had built his rocket stove on his wood deck, right next to his wood paneled home. I wanted to put more faith in his design, but it wasn’t clear he was thinking things out much.

The first fire I started in it used the long U shaped section like the guy with the wooden house used. It wasn’t bad. I was able to cook breakfast pretty easy on top of it. The only problem with making the fire chamber long is that it’s harder to clean the ashes out without taking the bricks apart – you have to reach back farther.

In the videos I watched all of the folks had a nice stove burner top to put above their fire, allowing the flames to escape yet keep what they were cooking steady. I didn’t have an old broken gas range to steal the burners from, so I had to prop my pan up on sticks that I set around the mouth of the chimney block.

The second time I put it together and lit it up I used the shorter U chambered cinder block. I couldn’t tell much of a difference – the fire was still pretty hot. I decided to cut grooves into one of the half-blocks I had, making the top like a burner, giving me a place to rest my pan or pot while letting the flame and heat escape from the chimney. 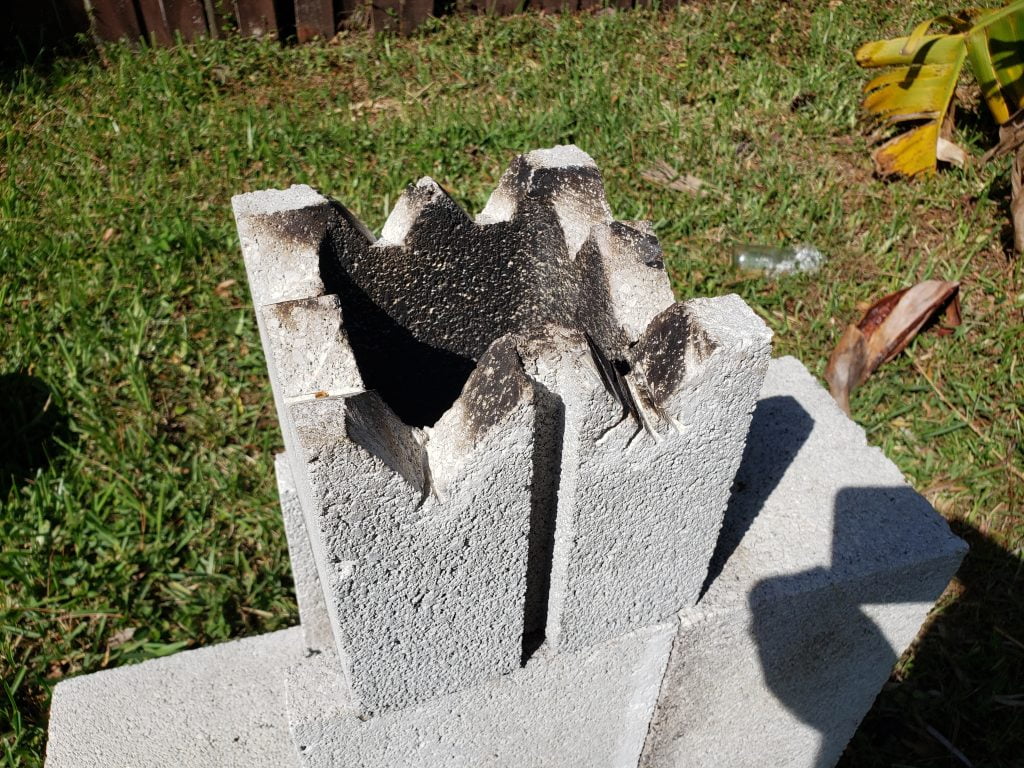 My son and I were able to get water boiling in about twenty minutes.

It was very comforting to know that, if we ran out of propane after a hurricane, we wouldn’t be out of hot water and we wouldn’t be unable to cook. We’ll be able to cook all we want, and make all the hot water we need, using only twigs, small sticks and palm fronds.

It made me wonder if there are other ways I could use abundant free resources to replace expensive technologies I depend on. Sky’s the limit, when you’ve got enough imagination, right? Maybe I can build a “rocket computer” out of drywall or something? I’m sure there’s a video about it on YouTube already.